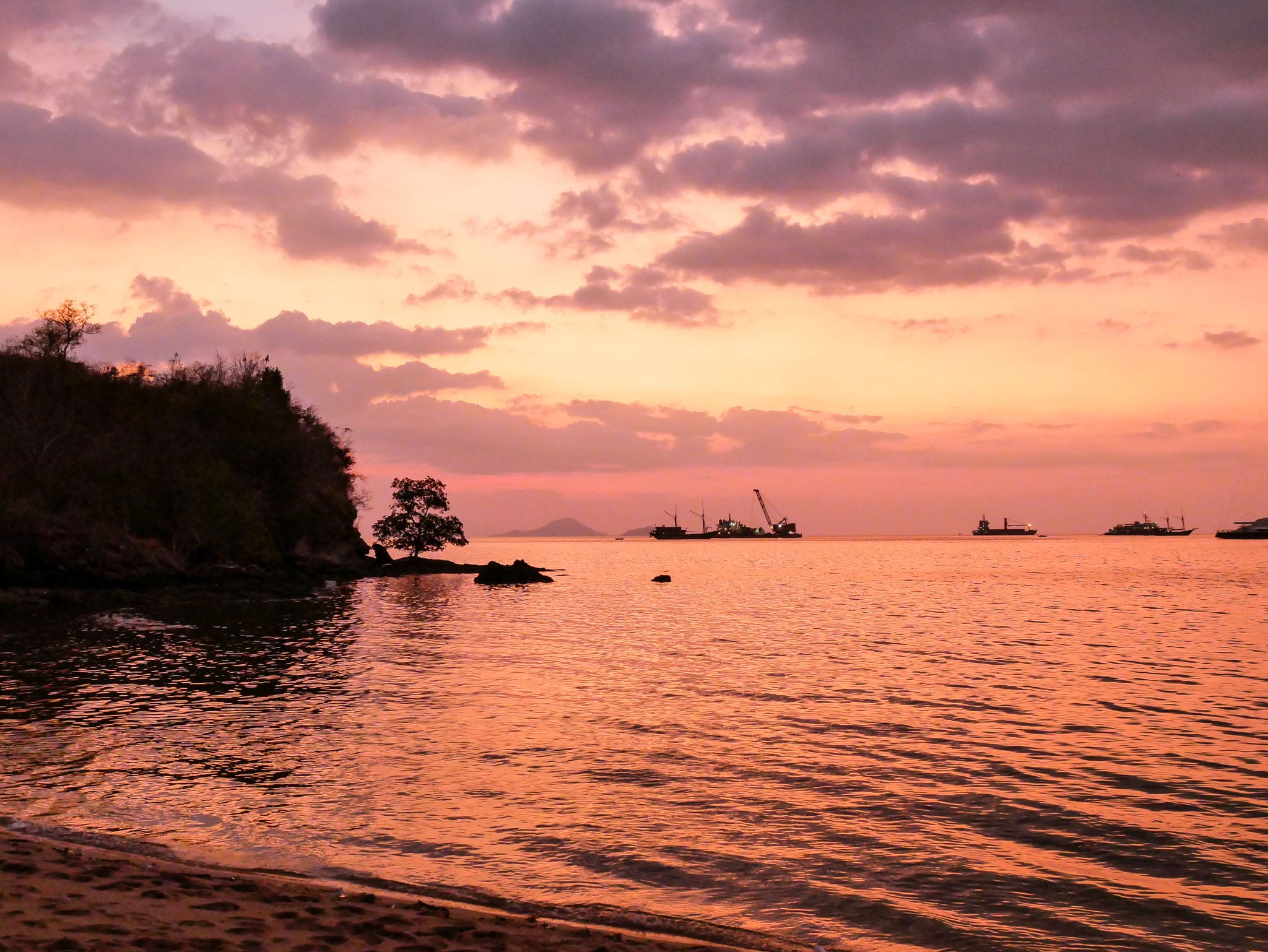 7 Ways To Be More Eco-Conscious While Travelling 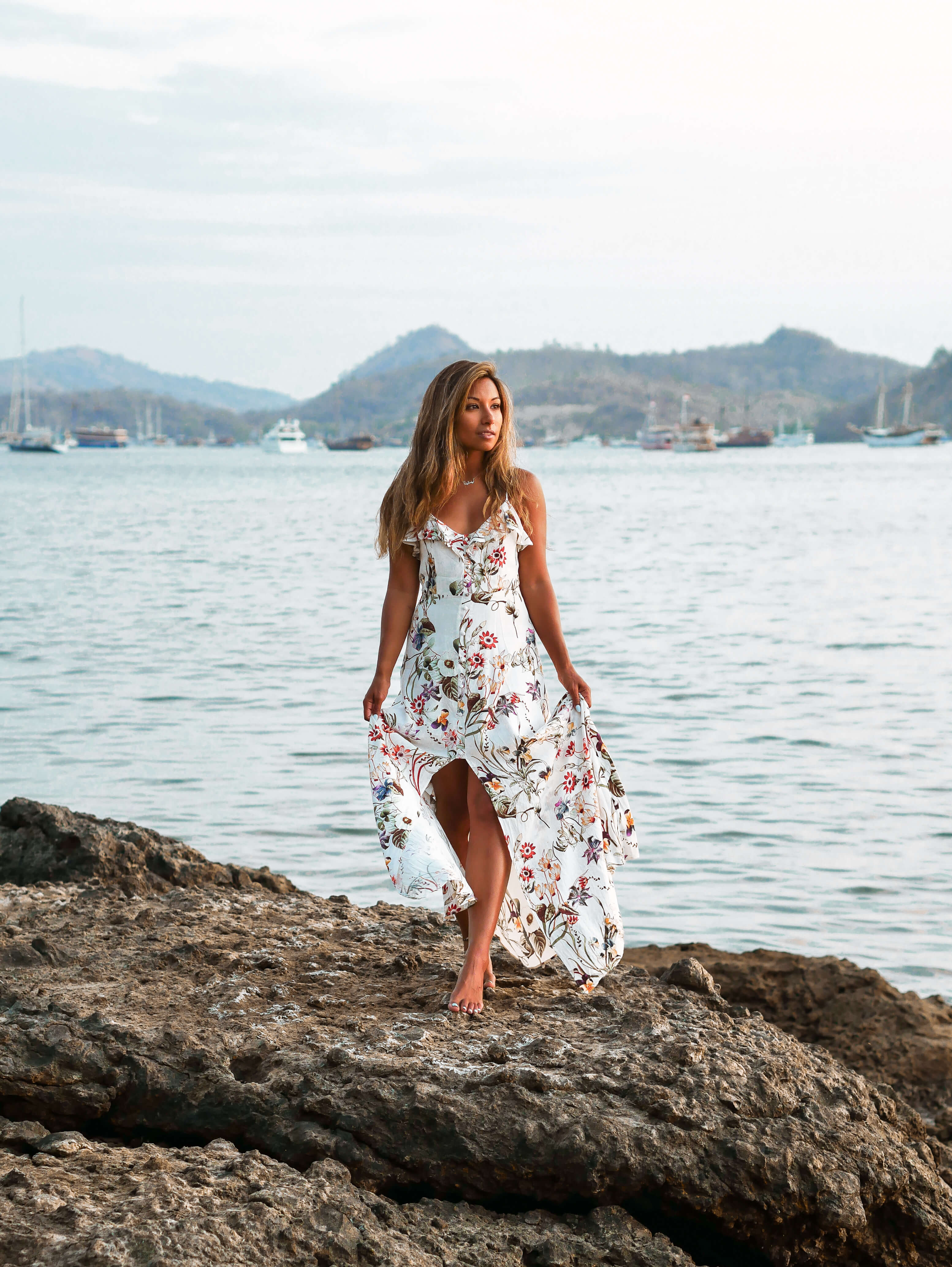 Sustainability and being more eco-conscious is something I've been trying to focus on a lot more lately. I've been thinking more about the way that I consume and dispose of products and trying to educate myself on the impact we're having on the environment and how we can do our bit to help fight issues like plastic pollution and climate change.

As a content creator, I think it's really important for me to stay educated on these kinds of topics, and use my voice to share more about how we can all take steps to be more sustainable moving forward. Being more eco-conscious doesn't necessarily involve making drastic changes to your lifestyle. Small, sustainable and low-effort changes are the most effective, as those are the things you're most likely to maintain. However, while it is quite easy to implement these changes into your daily routine, it can be a lot more difficult to be eco-conscious when you're travelling.

As wonderful as travelling and seeing the world is, it can also put a strain on the environment. Travelling also throws us off our habits completely, and it can be more challenging to opt for greener choices when you're on the go, especially when you're travelling to more undeveloped countries and your options are limited.

So, with this in mind, I wanted to share a few simple ways to be more eco-conscious while travelling, with the hope it might make you a little more aware and help you to reduce your footprint when you're on the go. Of course, in some places and situations, it can be almost impossible to avoid things like single-use plastics. However, that's not to say you can't take simple measures to reduce your consumption in other areas when you travel and be that bit more educated.

I'm definitely not perfect and there are many ways that I could be better, but I think having awareness is so important and if we want to have the luxury of enjoying these incredible destinations, we have a responsibility to protect them too. 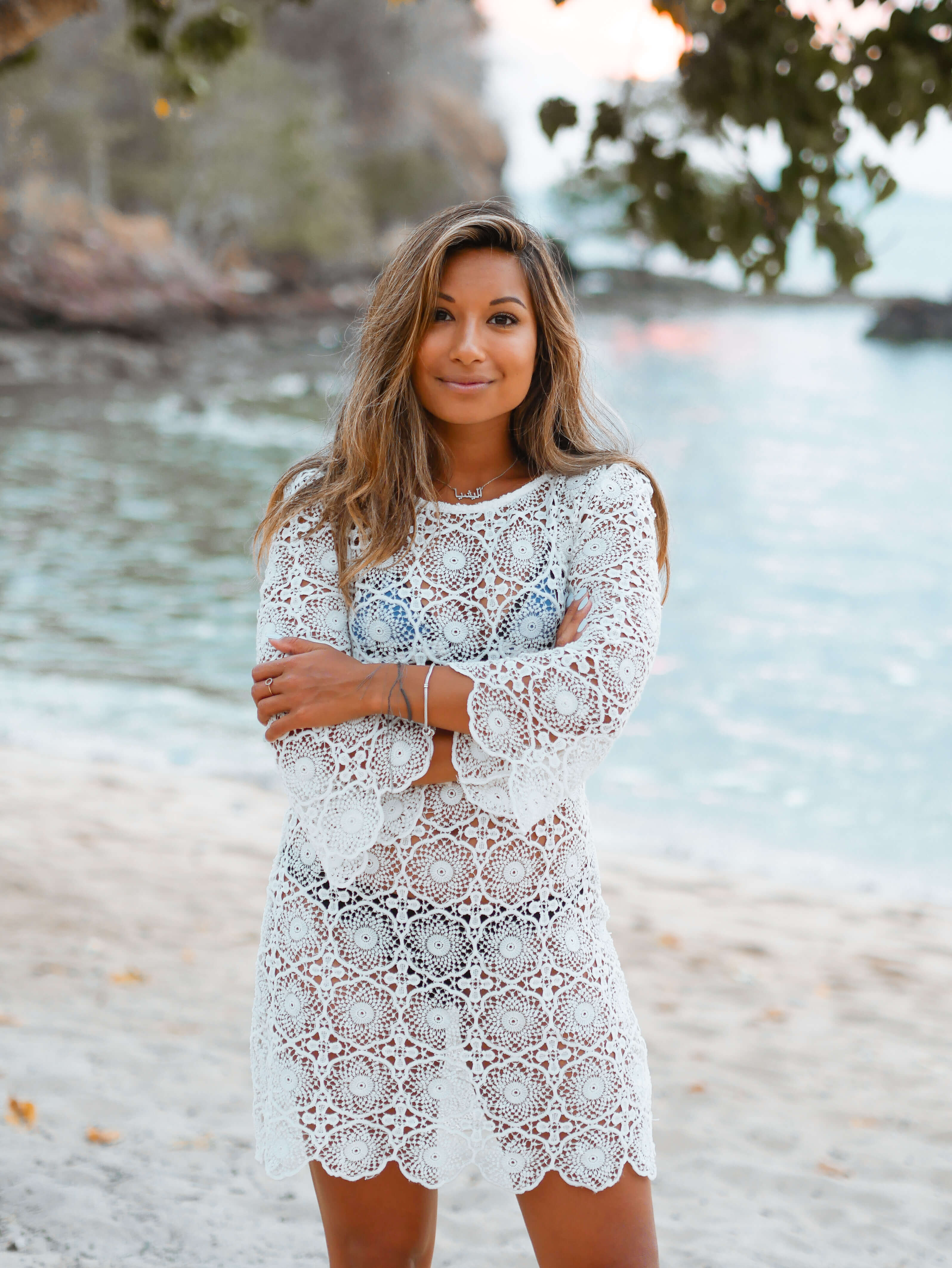 Microplastics, in particular, are hugely damaging as well. Microplastics are essentially small pieces of plastic and plastic particles that are formed when larger plastics break down. When you get microplastics in the ocean, they're ingested and absorbed by birds and marine life and organisms and it's so damaging to their health. Studies have also found traces of microplastics in things like fish, honey and even beer. Thus, they don't just impact the environment and wildlife, but they're making their way into our foods and potentially impacting our health as well.

On our trip to Indonesia last year, I was shocked to see how bad the problem had gotten compared to our trip 4 years ago, and places that were once pristine are now completely overwhelmed with litter and plastic. Remote islands in Komodo National Park, home to the amazing Komodo Dragons, are also consumed with plastic, and it was devastating seeing these beautiful rare creatures in their habitat surrounded by plastic bottles and plastic bags. This is partly due to tourism and visitors not disposing of waste properly, but also because the locals don't have the education either. Especially on more remote islands that don't have proper means to dispose of waste, they'll either dump plastics and waste in the ocean or burn it, neither being a solution that's kind on the environment.

We shot these pics in Labuan Bajo, which is the gateway island to Komodo National Park. It was impossible to find a spot that wasn't littered with plastic so we decided to take pics among the litter instead to showcase just how bad it is. And it's not just water bottles and plastic bags that are washing up - it's sweet wrappers, flip flops, styrofoam, detergent bottles, bottle caps (oh so many), straws, sweet wrappers, plastic washing baskets....everything. 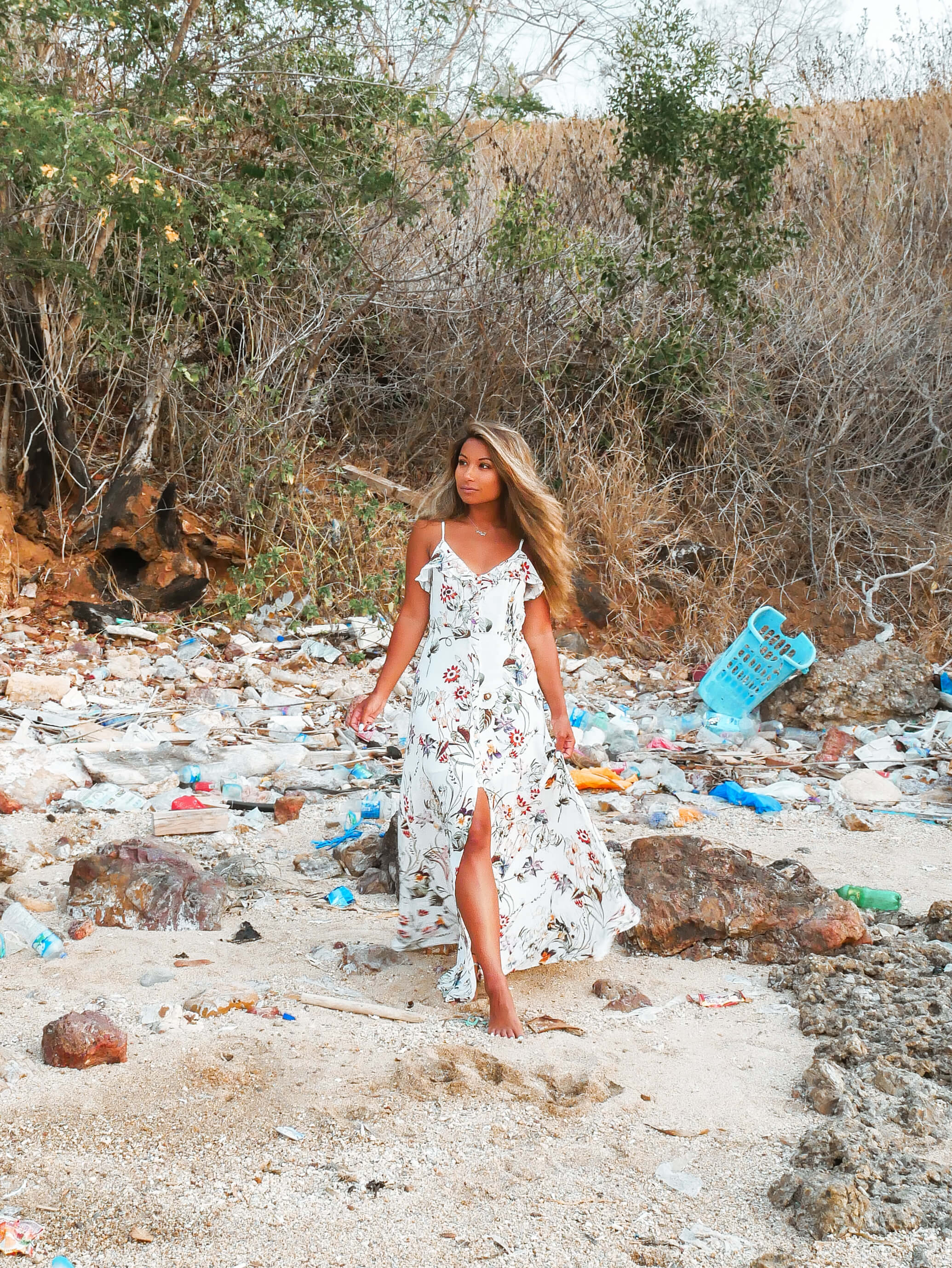 Simple Ways To Cut Back On Plastic While Travelling 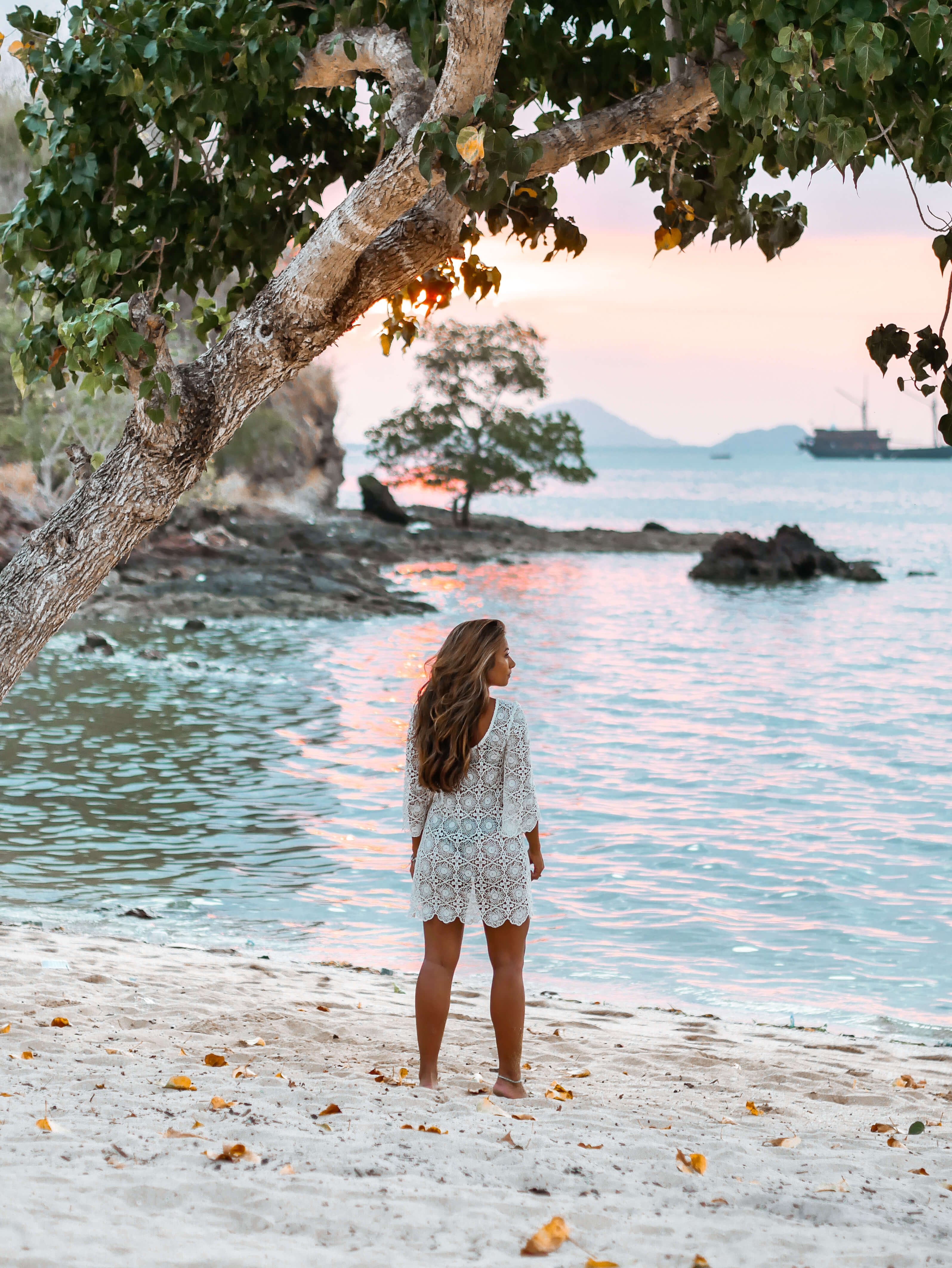 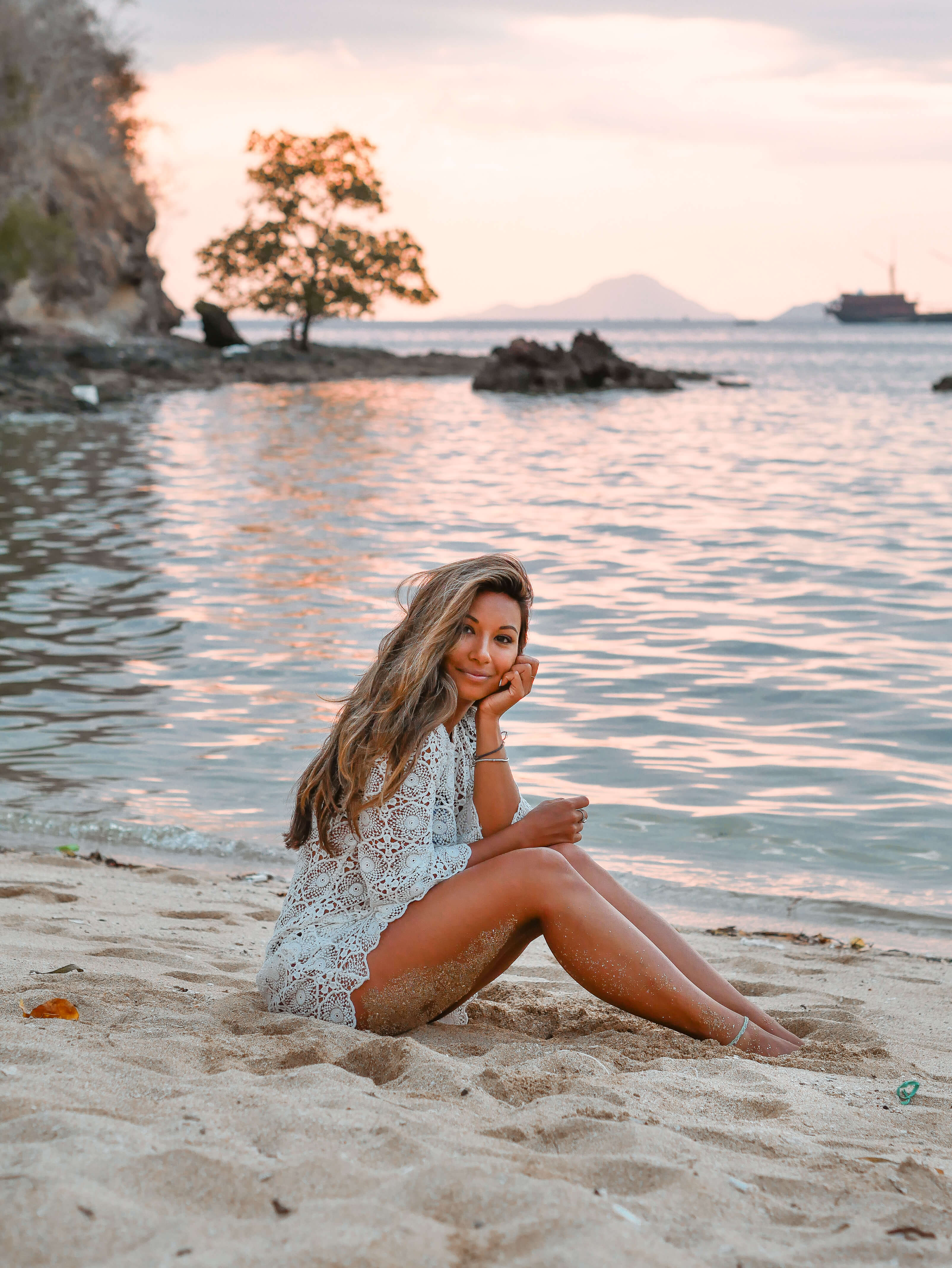 Leave nothing but footprints

Be mindful when it comes to how you dispose of your rubbish as you don't want to be contributing to the plastic problem by leaving your garbage on the floor or allowing it to get washed out to sea. Get in the habit of collecting your waste (plastic bottles, foil, wrappers, etc) and disposing of it properly. And if you see bits of rubbish when you're travelling, it doesn't hurt to pick it up and do a little cleanup while you're there.

If you travel a lot, one thing that you can do is offset your carbon footprint. This essentially involves donating money to help to reduce greenhouse gas emissions and compensate for the pollution that you're contributing to the environment. Obviously it doesn't completely cancel out your footprint, but the money goes to funding projects that help to reduce greenhouse gases, such as tree planting, renewable energy and local community projects. Learn more here.

Another way to be more conscious while travelling is to support eco-tourism. Eco-tourism focuses on preserving the environment and sustaining the local community, and by supporting this, you're essentially leaving a positive footprint when you're out exploring new places and contributing to the preservation and conservation of that area.

If you're craving an up-close animal encounter in somewhere like Southeast Asia, for example, do your research and look for an experience that's ethically sound. A lot of animal experiences that on the face of it seem harmless (such as elephant riding and tiger encounters) are actually really really exploitative and abusive, so be informed and choose experiences that are actually going to protect wildlife and the environment rather than have a negative impact. 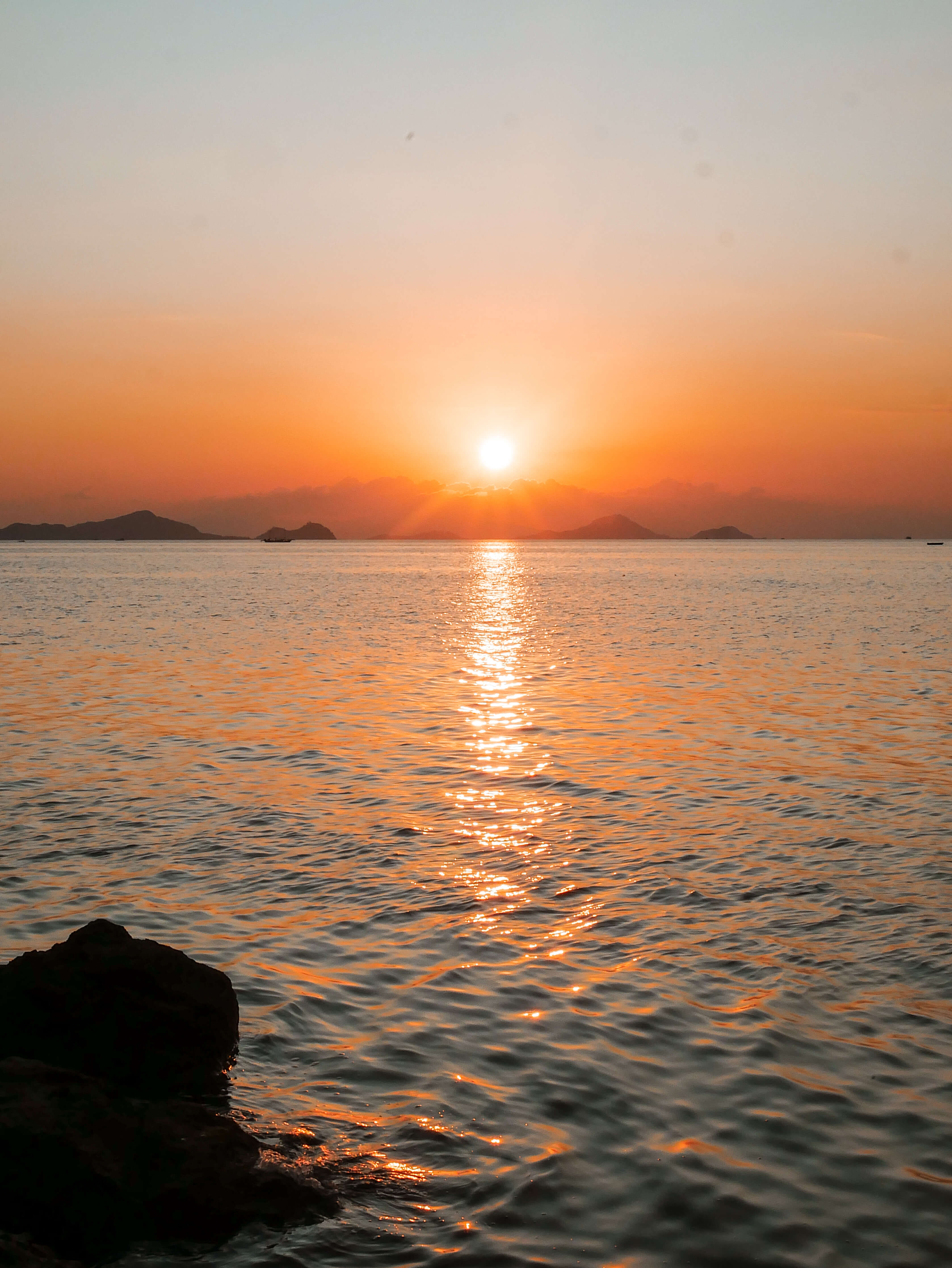 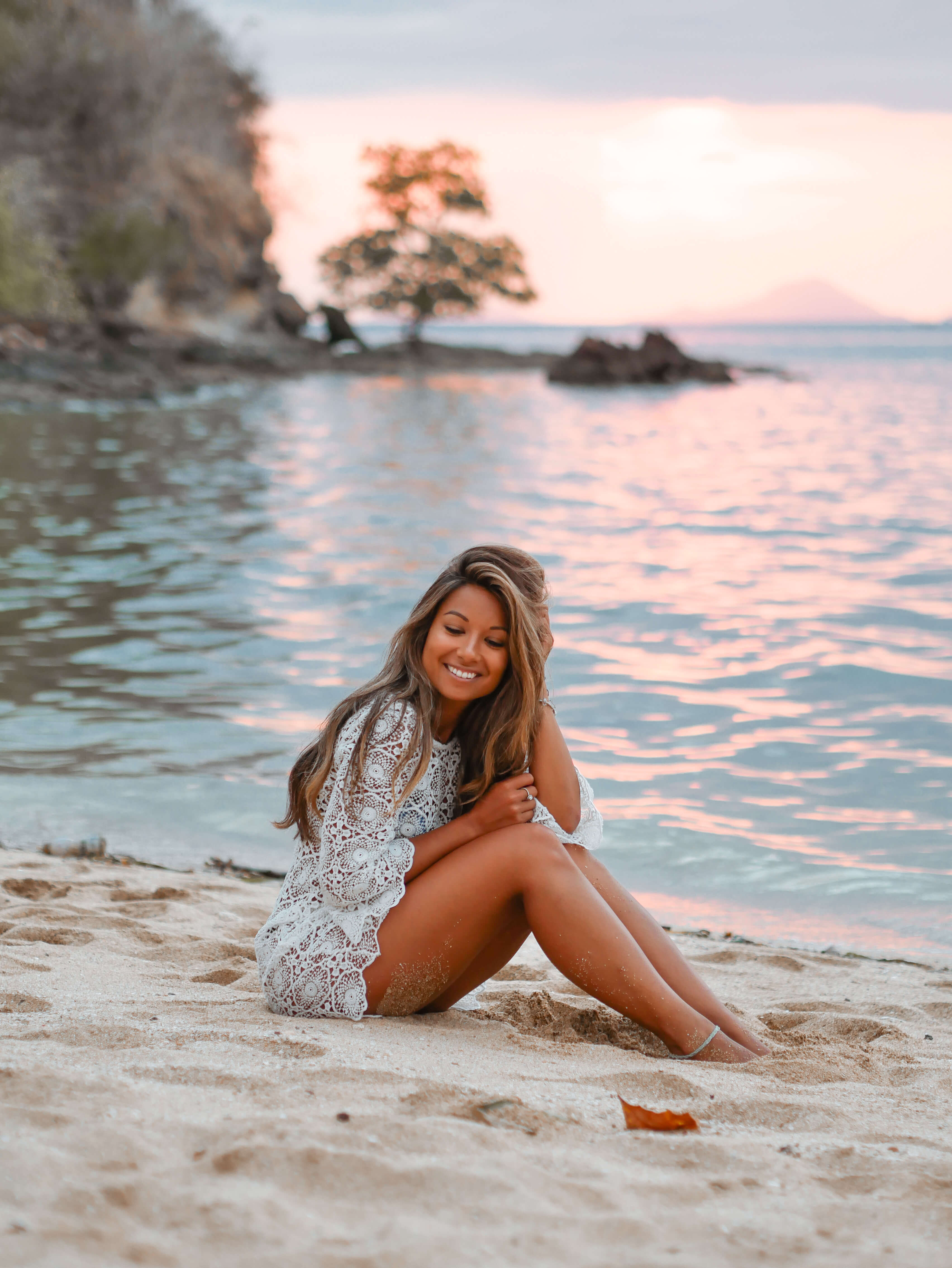 Now that I'm more conscious about my plastic consumption, I've become a lot more aware of the key contributors and users of single-use plastic. Hotels are a huge consumer, often in the interest of hygiene and convenience, but when you have a hotel that relies on single-use plastics and has thousands of guests staying each night, that consumption racks up.

Fortunately, there are a lot of amazing hotels out there that are eco-conscious and are doing their bit to reduce consumption and their footprint. The Six Senses Resort is such a pioneer in the eco-space, and when we stayed at the Six Senses resort in Uluwatu in Bali, I was so impressed with their sustainability efforts. They have a water-bottling site at the resort, and they purify and mineralize still and sparkling water for their guests to completely cut out their use of plastic bottles (amazing!!).  The Fairmont Hotels are also taking great steps towards sustainability. The Fairmont Whistler has a great program to recycle and divert discarded soap and amenity bottles away from landfills by repurposing the products and distributing them to Canadians in need at local food banks and shelters. They also, along with The Fairmont Pacific Rim in Vancouver, provide only glass-bottled water in rooms rather than plastic bottles, and both hotels are plastic straw free.

One thing I've got into the habit of doing is reusing my toiletries bottles and ziplock bags when I travel. I used to buy miniature toiletries, but when I started to travel more frequently I realised how wasteful that was. The tiny bottles only last 2-3 uses and then you throw them away, plus they're quite costly too. Now, I have a collection of standard miniature travel bottles that I refill with shampoo/conditioner/cream etc whenever I travel and it's a much better solution. You can buy mini travel bottles at any drug store, and that's also my secret to taking more toiletries and skincare products when I have limited weight.  I'll transfer my creams into mini bottles (as long as it doesn't degrade the product) and that always saves me a few kgs.

You can make so much positive change by simply using your voice and educating others. By sharing your knowledge and wisdom, you have the power to help other people change their habits in a positive way, even if it's just something small.

When we were on a boat trip in Indonesia, I noticed that the tour operators were handing out tiny bottles of water to everyone on the boat. By the time sunset rolled around, our one small boat had easily consumed over 150 small bottles of water and it bothered me a lot, especially as the plastic problem there is so bad. I mentioned it to the captain and explained that a better solution would be to hand out larger bottles, or even better, to have a water dispenser on board. That would be cheaper for them but also massively reduce how much plastic they consumed. Initially, he didn't understand what the problem was, but by the end of our conversation, he was genuinely shocked when he did the math and realised how many bottles they consume in just 1 week. Whether or not any change resulted from that conversation, I don't know - but the point is that by educating people, in a constructive and friendly way, you can at least raise awareness and understanding of issues like plastic pollution, and hope that one day, change will follow. 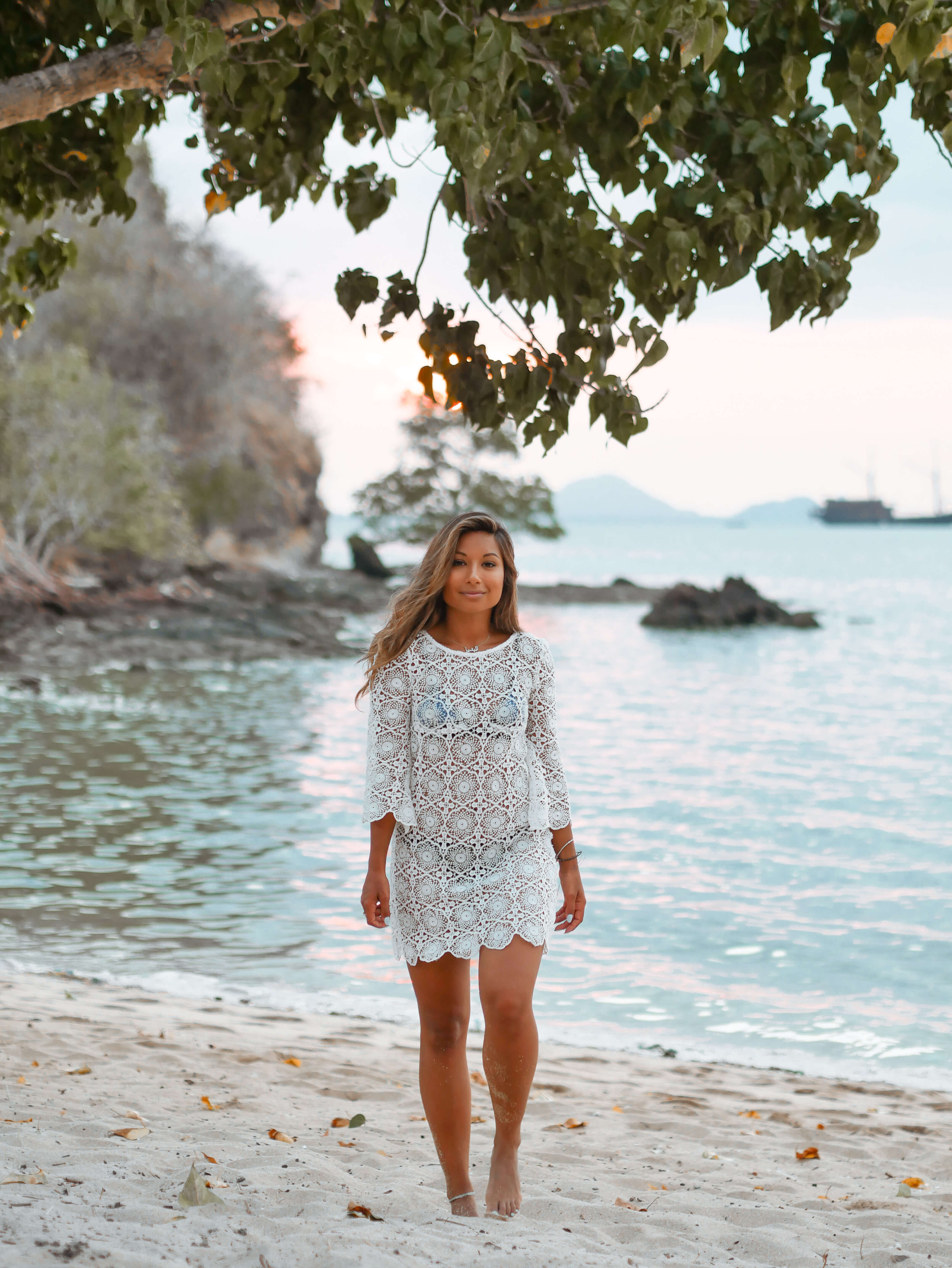 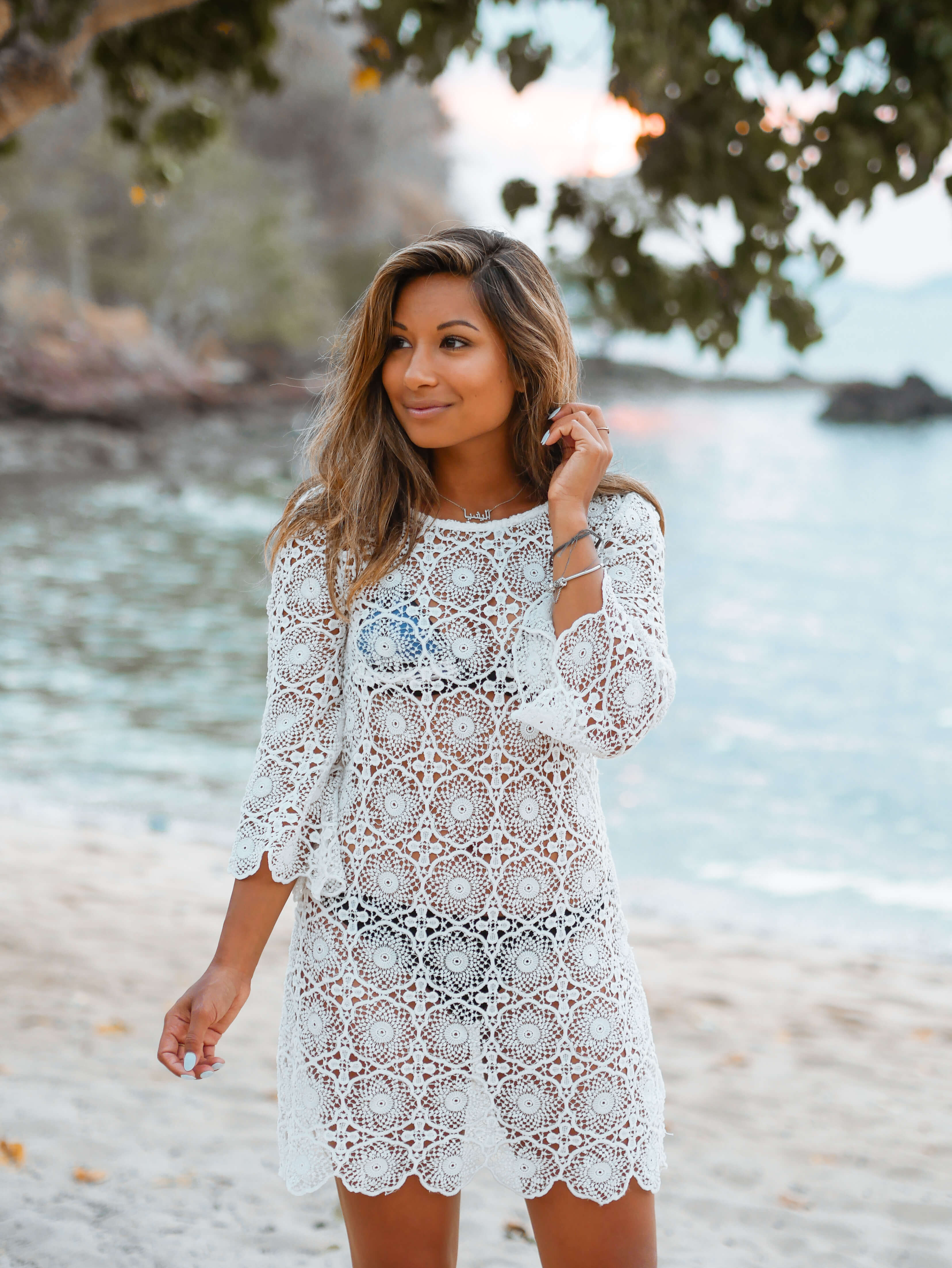 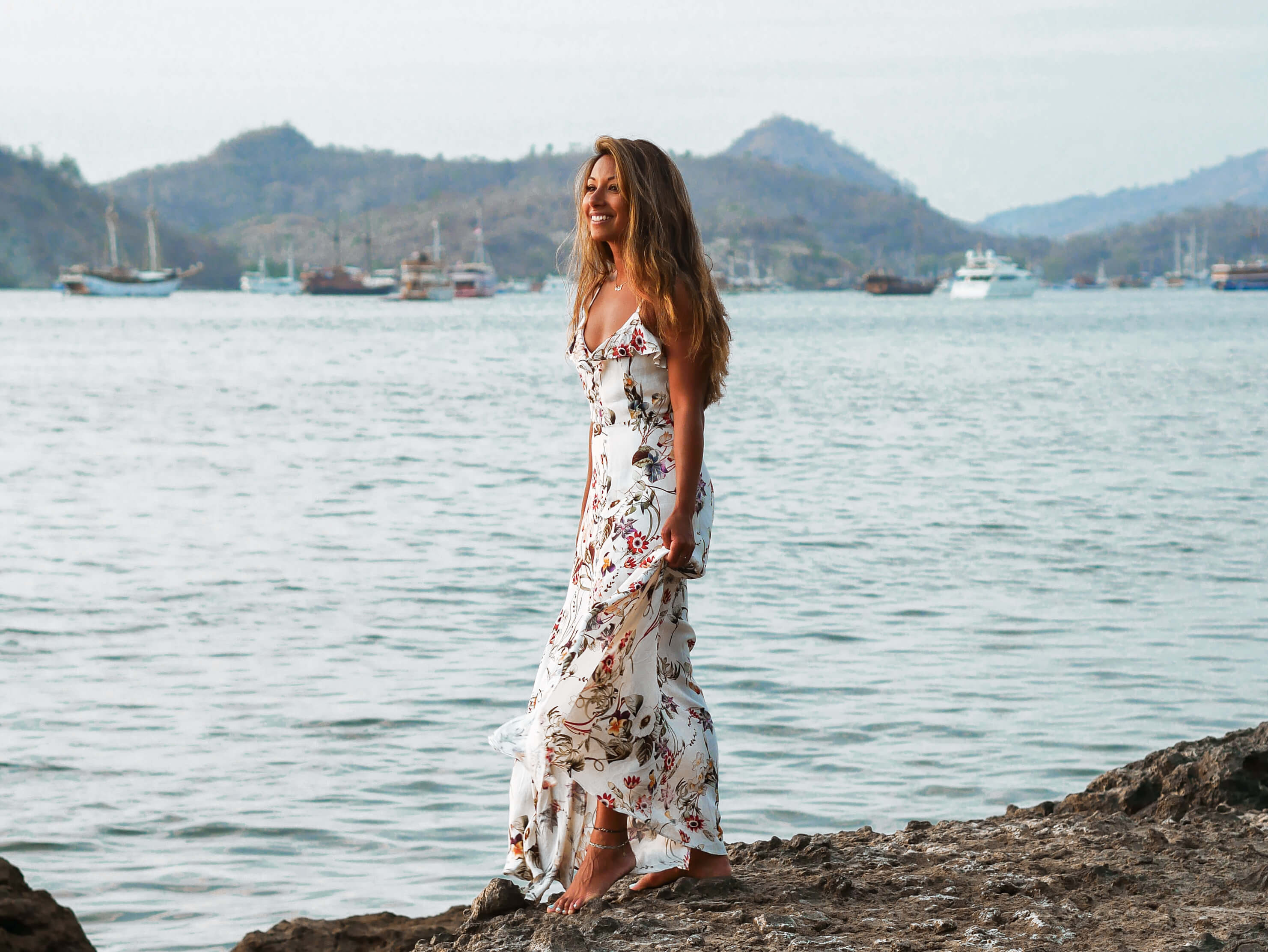 I really hope this has been insightful in one way or another! Do you take steps to be more eco-conscious while travelling? If so, what kind of things do you do to try reduce your footprint? I'd love to know!!