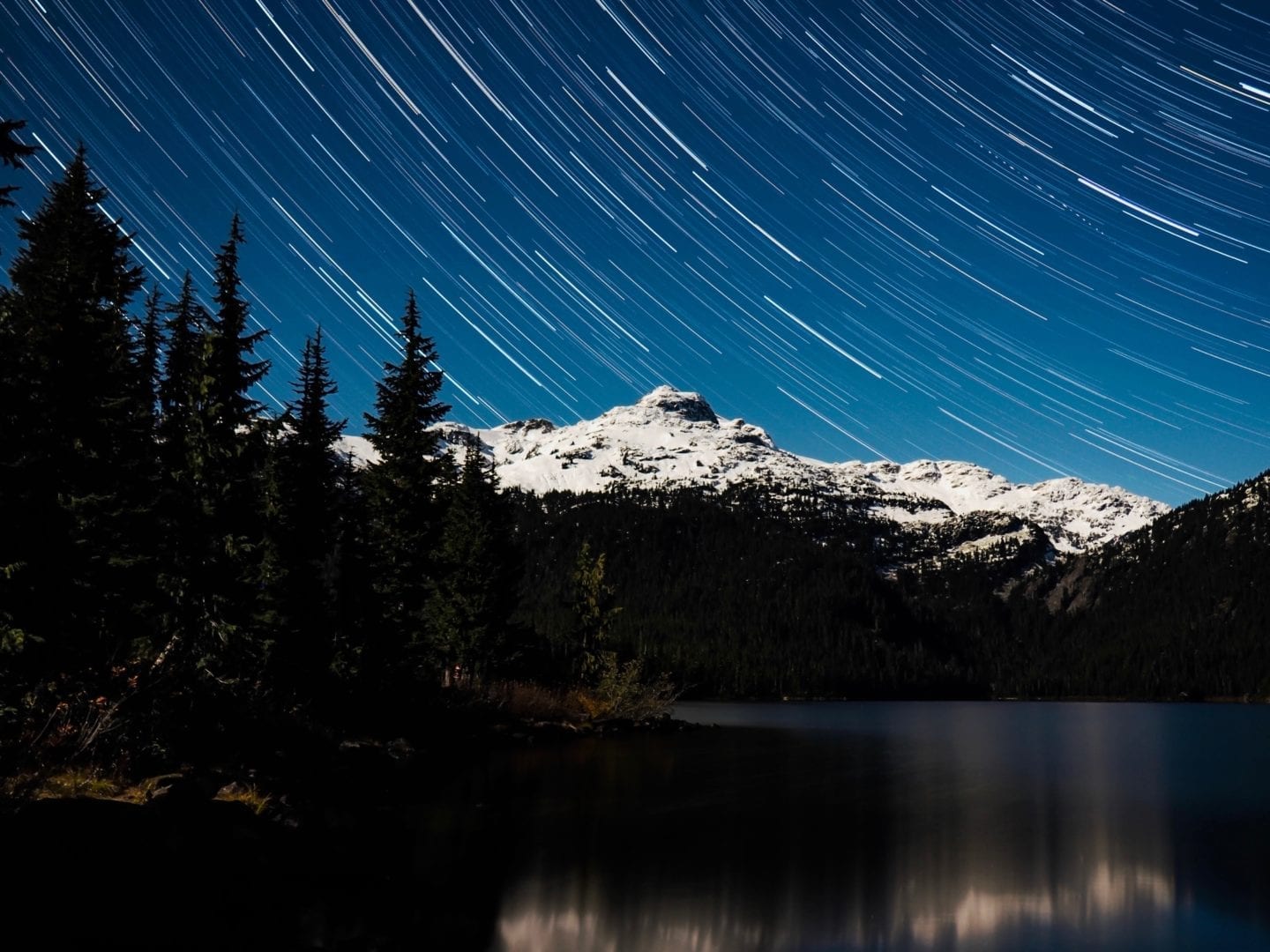 Last week I headed up to Callaghan Lake in Whistler with my photographer friend Aaron with a goal to capture some night skies.

Astrophotography is something i've been wanting to learn for a long long time. While my everyday photography has definitely improved over the last year or so (largely helped by blogging), night photography is something i've always been a little scared of, simply because I really didn't know where to start. I've been avoiding the "M" setting on my camera since forever, and even though I have a few books and i've done a lot of research, what I really wanted was to see night sky shots in action and learn from actually doing it.

I'd been picking Aaron's brains about cameras & night sky shots for a while, so when he offered to take me out and give me a lesson, obviously I said yes!

His photos are incredible, so I figured what better way to learn than from a pro. We picked a night with a clear sky and drove up to Callaghan Lake, which is about 1h30 from Vancouver just south of Whistler.

It wasn't easy to get to and the road was a real rough ride, but it was all worth it as the lake was beautiful and the conditions were perfect. Since it's far from anything, there was little to no light pollution which meant the sky was saturated with stars.

For these shots, I used my Olympus PEN EPL-7, with the 14-42mm kit lens. It's easy to underestimate the PEN as it's so small, but its capabilities are amazing and I was really impressed by the shots I captured. 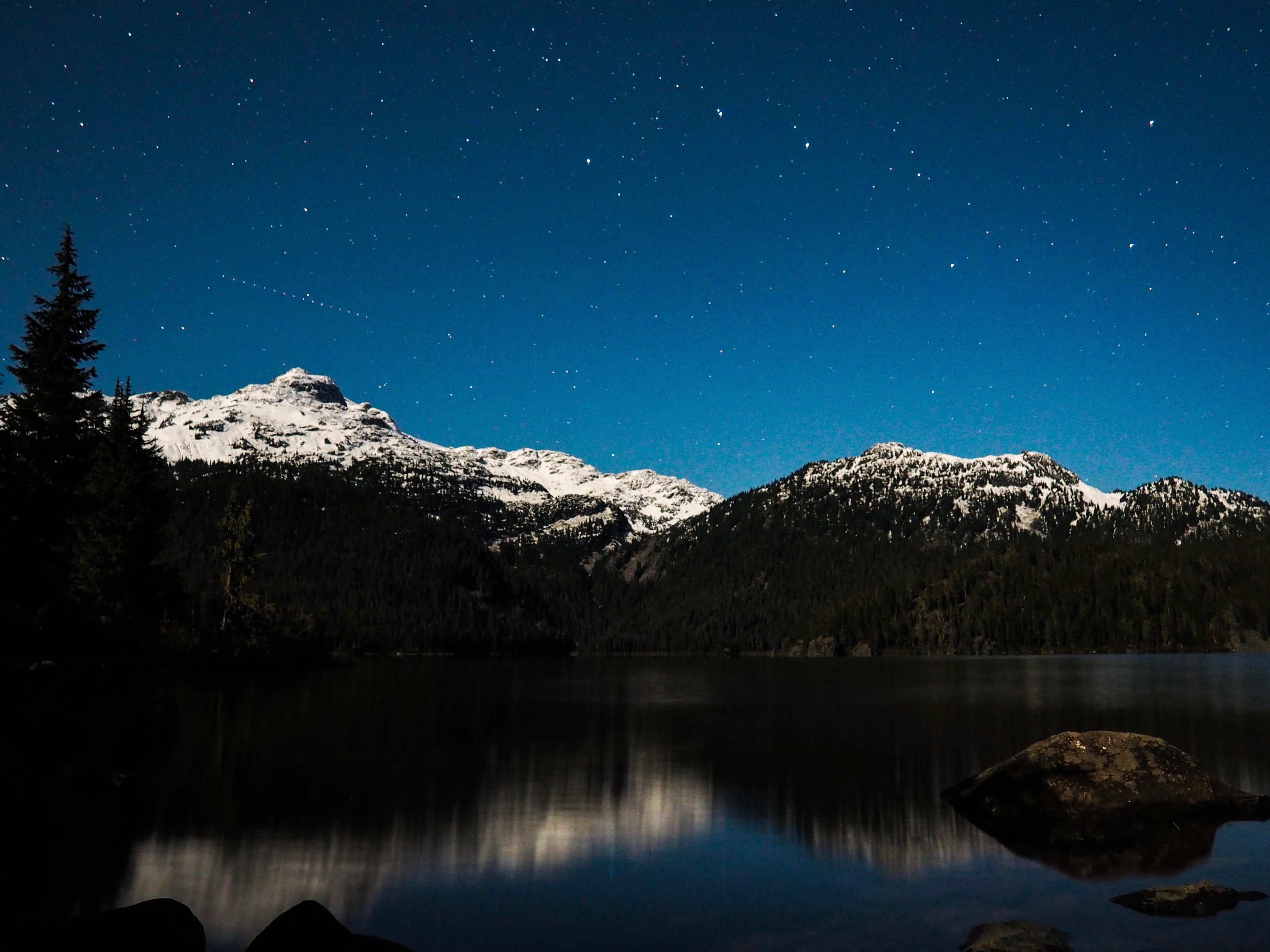 After Aaron explained the manual settings and what we were hoping to achieve, we set up the cameras for star trails. After playing around a bit, I set my camera to 30-second shutter speed, f/3.5, ISO 1600, and set it up to shoot continuously for 45 minutes.

But setting up the shutter speed/ISO/aperture is only a portion of the job. I actually didn't realize how difficult composing the image would be. Fortunately, the moonlight was really bright, which meant I could see the landscape in front of me with my eyes and I wasn't fumbling around with my equipment in complete darkness. However, on my camera, the screen was completely black so it was a case of shooting, tweaking, shooting, reframing, and so forth, until the shot was properly composed. All in all, this took about 20 minutes to get the composition the way that I wanted. When you're trying to capture every aspect of the image - rocks, sky, lake, trees - it becomes a long process taking test shots especially as you can't physically see your landscape through the lens. This is why it helps to know your camera and its movement inside out, but I guess this only comes with practice. It was absolutely freezing too (about 3 degrees), and no cloud cover meant it was bitingly cold so my hands were numb after about 15 minutes.

Another thing that was difficult was getting the shot in focus. Since you can't use Autofocus (because it's so dark your camera has nothing to focus on) you need to focus manually. However, when your viewfinder is completely black, it's impossible to know whether it's in focus or not. Aaron was prepared and brought a powerful torch so we could use the rocks as a marker, but my first star trail shot was slightly out of focus as I didn't focus it properly.

After everything was set up, we left the camera to shoot for 45 minutes and let the magic happen. In terms of post-processing, the main work was stacking the photos together to produce the star trail. I want to mention that 1 shot won't produce a star trail. This photo was a compilation of almost 100 shots. The longer you shoot, the more movement you'll capture and the longer the star trail will be. I used Lightroom to straighten the image and complete a few minor edits, but it didn't need a lot as the moonlight lit up the shot so much. I was SO happy with the star trail I captured and I can't get over how beautiful it is! 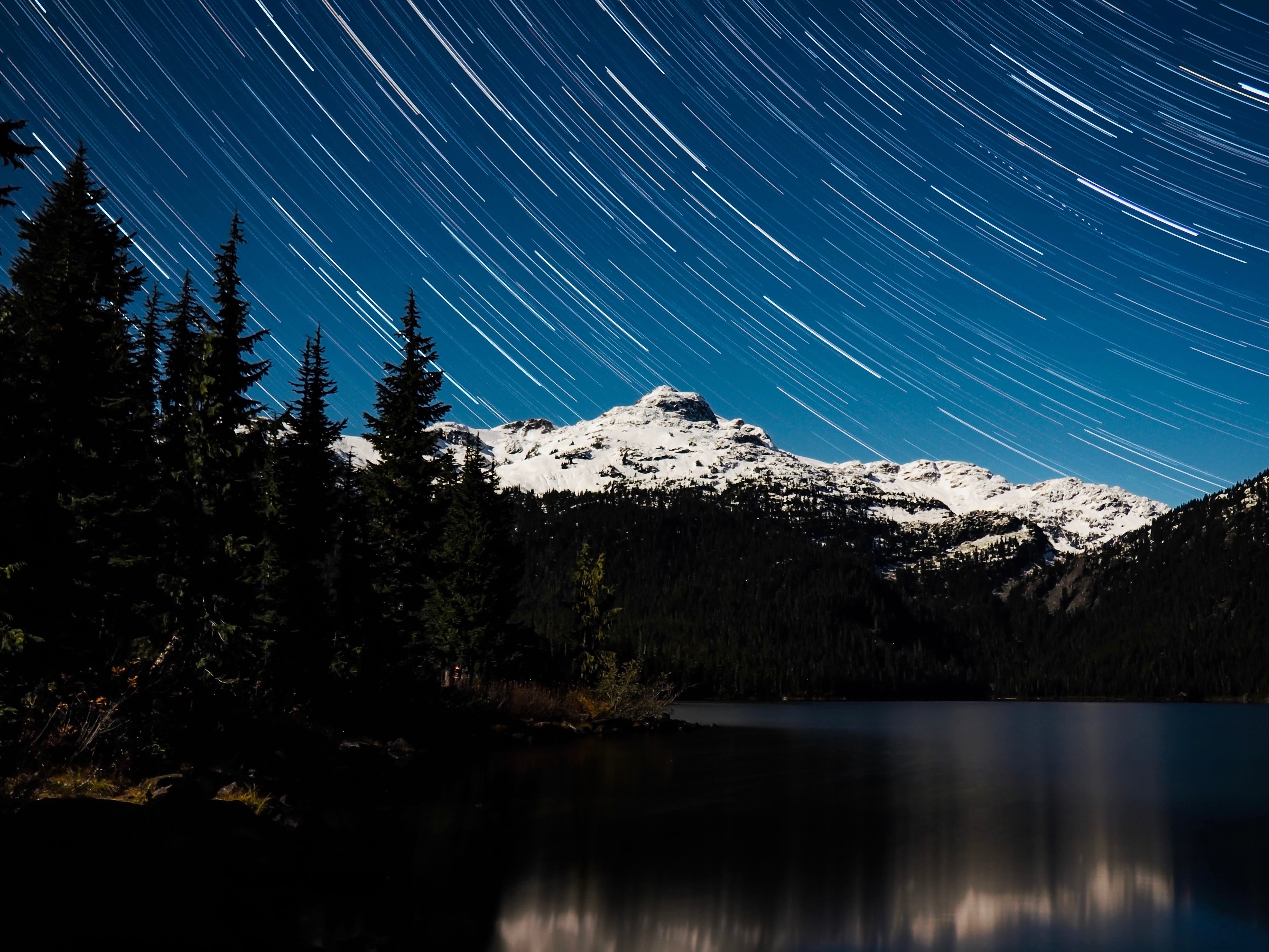 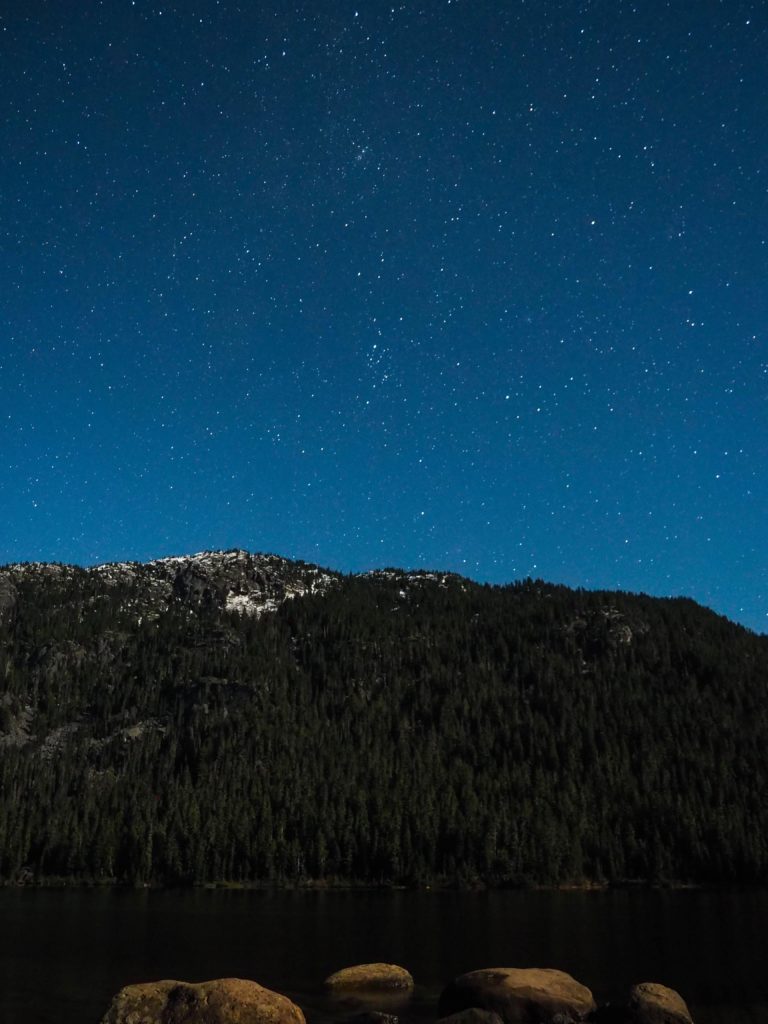 Although October isn't the prime month for shooting milky ways and the moonlight drowned out a lot of the stars, we could see the milky way ever so slightly for about 30 minutes.

You can see the cluster of stars and the faint outline of the milky way running up the centre of the shot. It wasn't dark enough to properly see or capture it, but learning to shoot milky ways is definitely one of my goals!

My key takeaway was that night photography takes time. It's not a question of point and shoot, simply because it's impossible to just point & shoot when you can't actually see what you're shooting!  A star trail may take 1 hour or more to set up & shoot, which means you might only get a few shots in a whole night. The annoying thing is that if anything happens in that time/your camera messes up/you don't set it up properly, that's time you're not getting back. You also have to factor in travel time, since you need to go far away from the city/light pollution to get clear night sky shots.

Another takeaway was that the conditions are constantly changing. The stars move, the moonlight shifts, and especially when you're in the mountains, it can get pretty damn cold. The white haze on the lake in the photo is from the moonlight shifting, and it's pretty prominent since the moon was so bright.

Location is also important, especially on a cold night. We were able to park the Jeep right next to the lake, which meant we weren't trekking back to the car and we could see the cameras from the front seat & check they were still shooting. This was useful when my camera stopped shooting & I managed to spot it. I'd set it to "Sequential H", but we noticed that it kept stopping so changed it to "Sequential L" so the shots weren't as high-speed. I'm not sure why it didn't work on the higher-speed, so it's something to note if you have an Olympus EPL-7. I know that it's not always possible to park next to where you're shooting, but it definitely helps & can save you a lot of time.

And finally, I can't explain how good it was to learn from someone else. Aaron taught me so many tricks and general stuff that I wouldn't have learned from reading a book. I'd been putting off going out on my own for so long - simply because I was scared to rock up under a night sky without a clue what to do - so it was nice to have someone to guide me & show me the ropes. 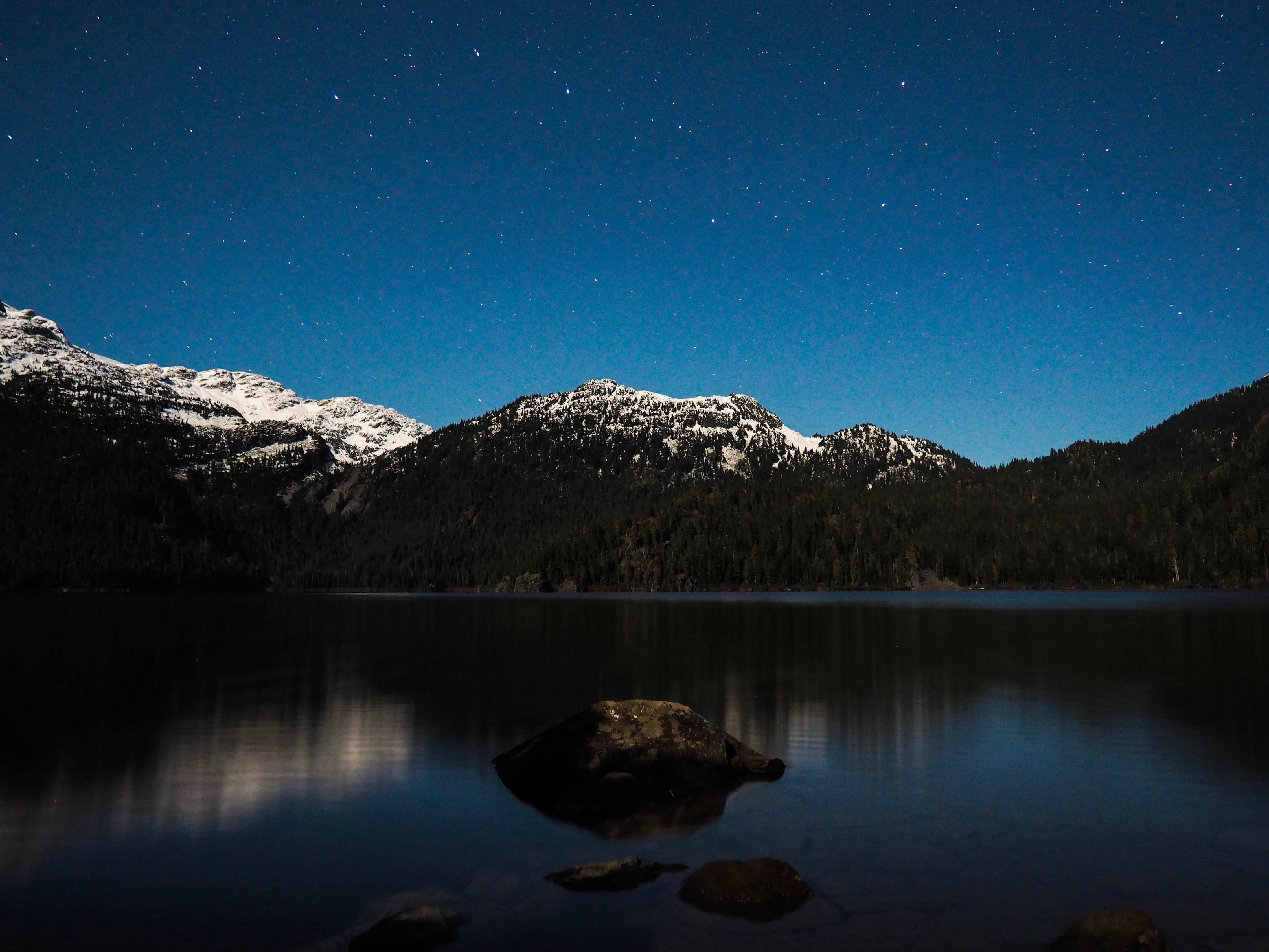 Will I go out again?

Hell yes! I cannot wait to go out again and experiment more with my camera and see what I can shoot. Now I've got a bit of an understanding of how my camera & astrophotography works, I'm so excited to learn more and it's now my little project so I can't wait to work on it.

My shots are not perfect, in any shape or form, and I know that I have a lot to improve on. But, I really couldn't be more proud of how the photos turned out and I never in a million years thought i'd be able to produce a star trail like that!

Hopefully, as I progress I can share a bit more about night photography & the key things that I learn along the way. If you're interested in doing a workshop/lesson or learning from a pro, Aaron (@avhphoto) is a great teacher & I definitely recommend him. He was supportive, gave me guidance when I asked for it but also let me do my thing and put my mark on it, which I personally think is exactly what you want in a teacher.

Is learning to shoot star trails something you want to do? What are your photography goals, or do you have any tips to offer? Let me know in the comment box below! 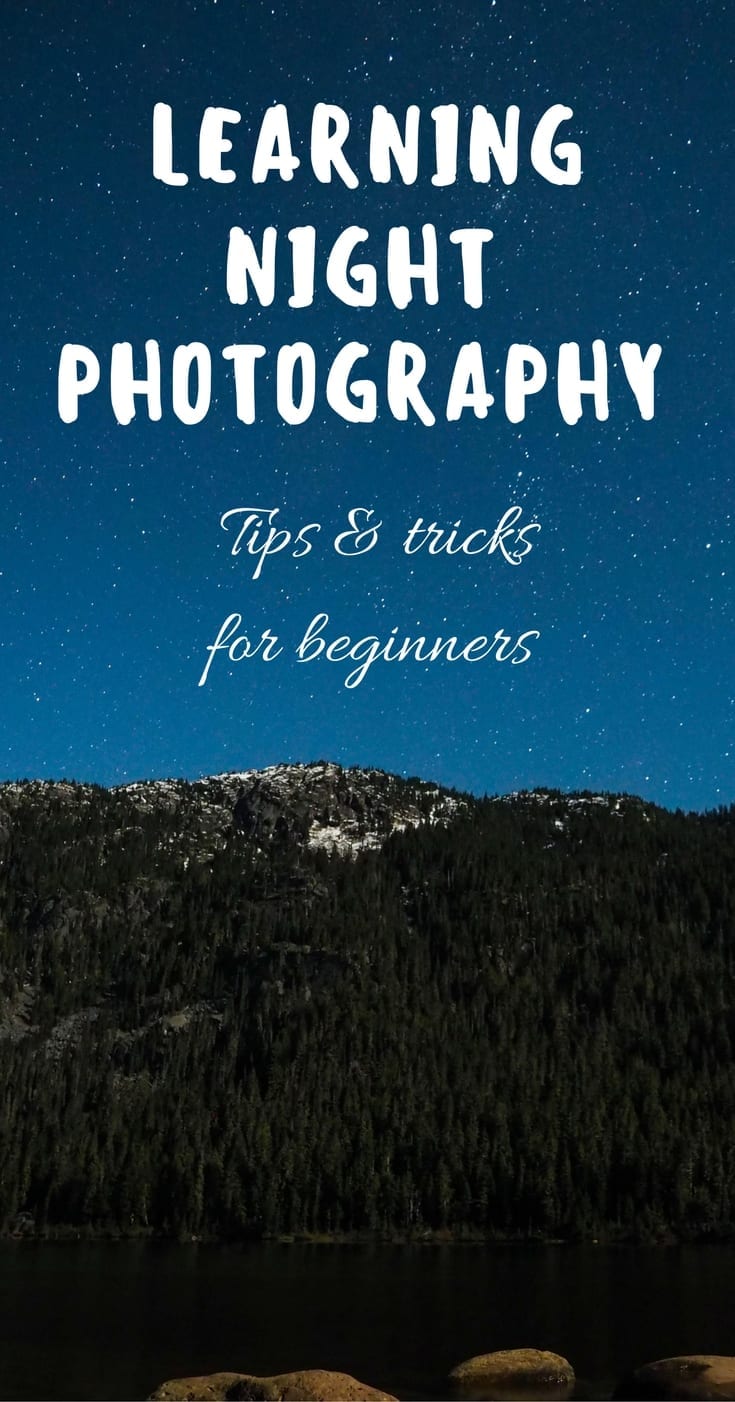