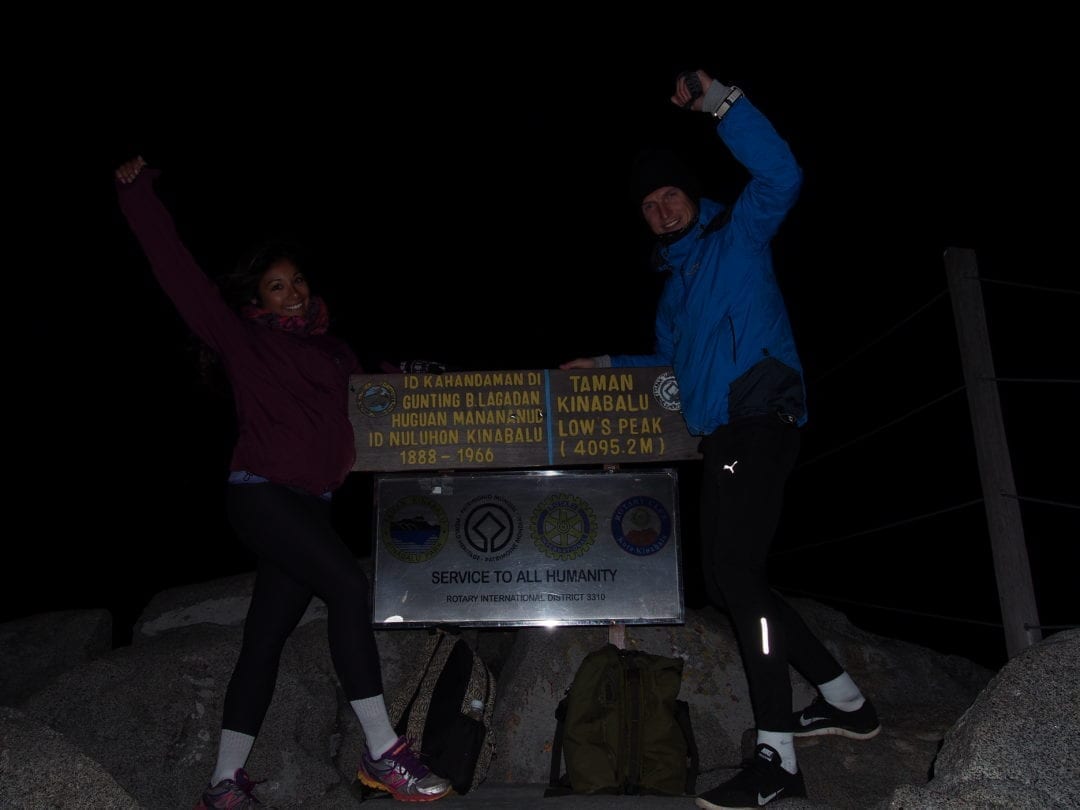 As we delved further into Borneo’s prominent Crocker Range, we soon realized the challenge ahead was bigger than we thought. The huge monstrosity peering over us was no other than Mount Kinabalu, the 4100m high mountain that we had agreed to climb with no proper equipment, shoes or idea what we were getting ourselves in for. 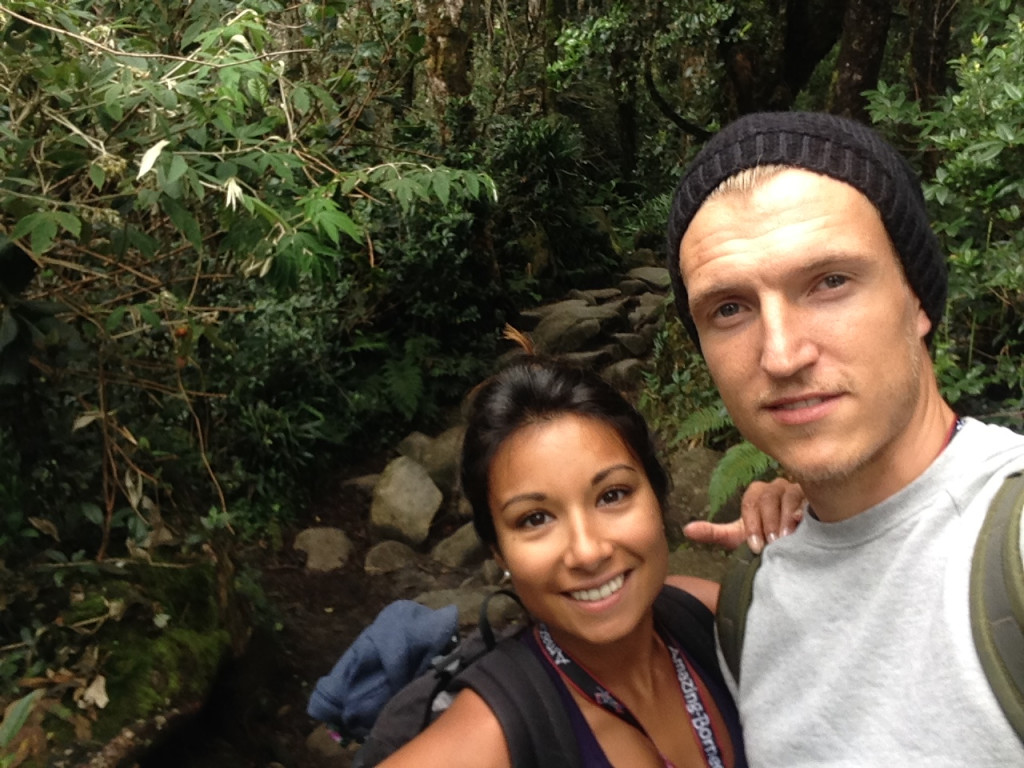 We set off in the early hours armed with sandwiches, snickers and a full load of waterproof gear and water. We knew it would be a tough journey ahead and although we’re both fairly fit, climbing a mountain is another game. We began our trek up to the rest house at 3400m, counting down each kilometre as our legs quickly began to tire.

We passed waterfalls, rodents and a number of exhausted climbers on the way, being careful not to let the piercing mountain chill to catch up with us. Although we initially questioned our choice of hiking attire – Nike Pro, North Face and New Balance – we were soon assured that we’d be just fine. If a group of 60-year-old Japanese tourists kitted with Ponchos and velour tracksuits could do it, so could we. 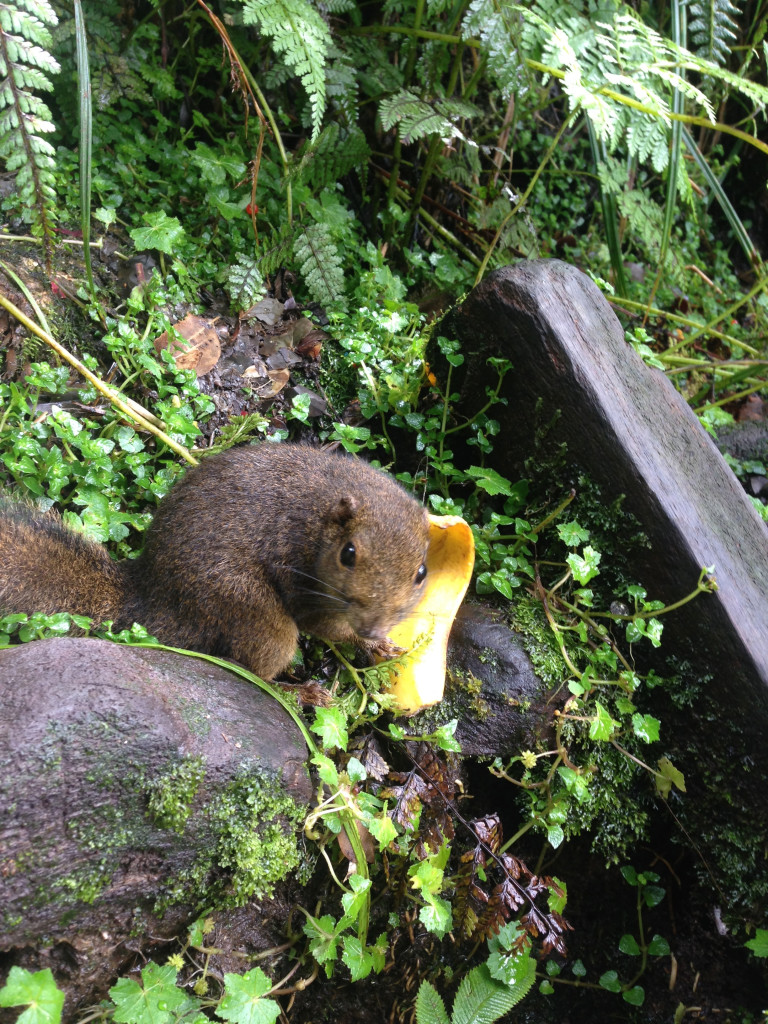 The beautiful thing about climbing a mountain is that you constantly see change. The flora changes as you climb, the treed become dryer and the lush greens slowly turn into arid shrubs. The temperature drops roughly 1 degrees per 100m climb, and the altitude slowly becomes apparent as every breath becomes harder to catch. The last 45 minutes of the journey were arduous; the air was thinner, we were getting out of breath much easier, our legs were tired and the rocks were sheer. We scrambled higher, rock-by-rock, spotting the rest houses in the distance and sighing in relief that we’d reached our destination. 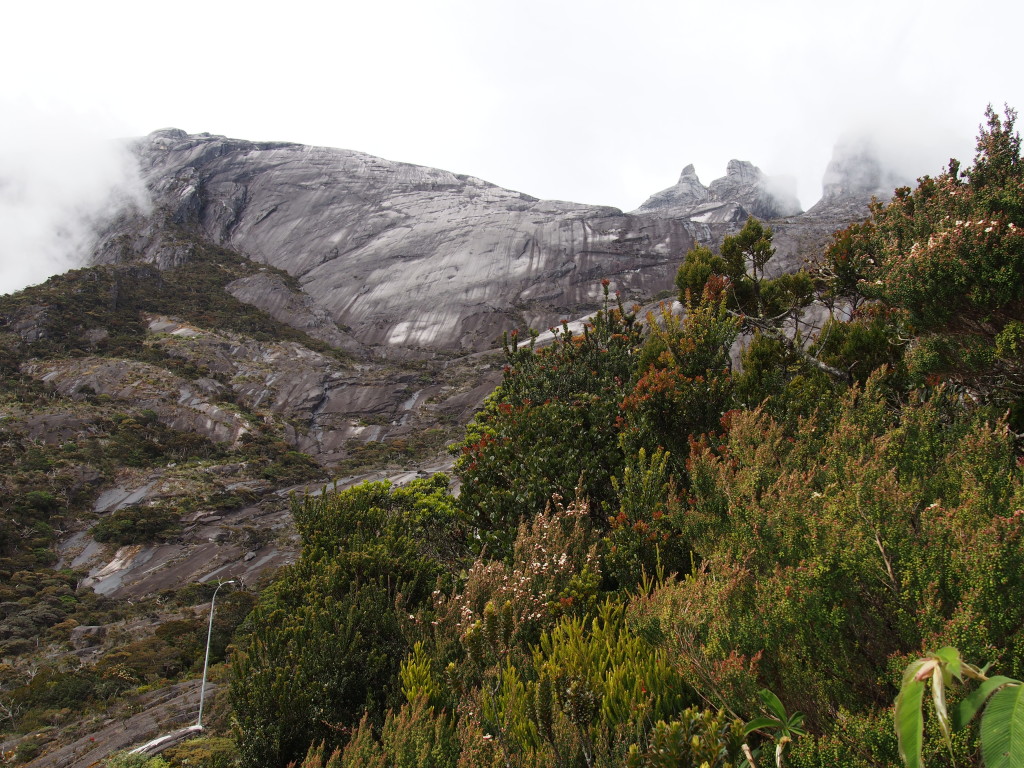 After 4 long hours, we were so happy to reach the rest house. We spent the afternoon watching clouds float by, recuperating and trying to shake off our mountain chill. Although our typical winters back home average around 5-10 degrees C, the cold definitely overwhelmed us; needless to say it definitely took a fair few cups of tea to bring us back to a normal temperature. 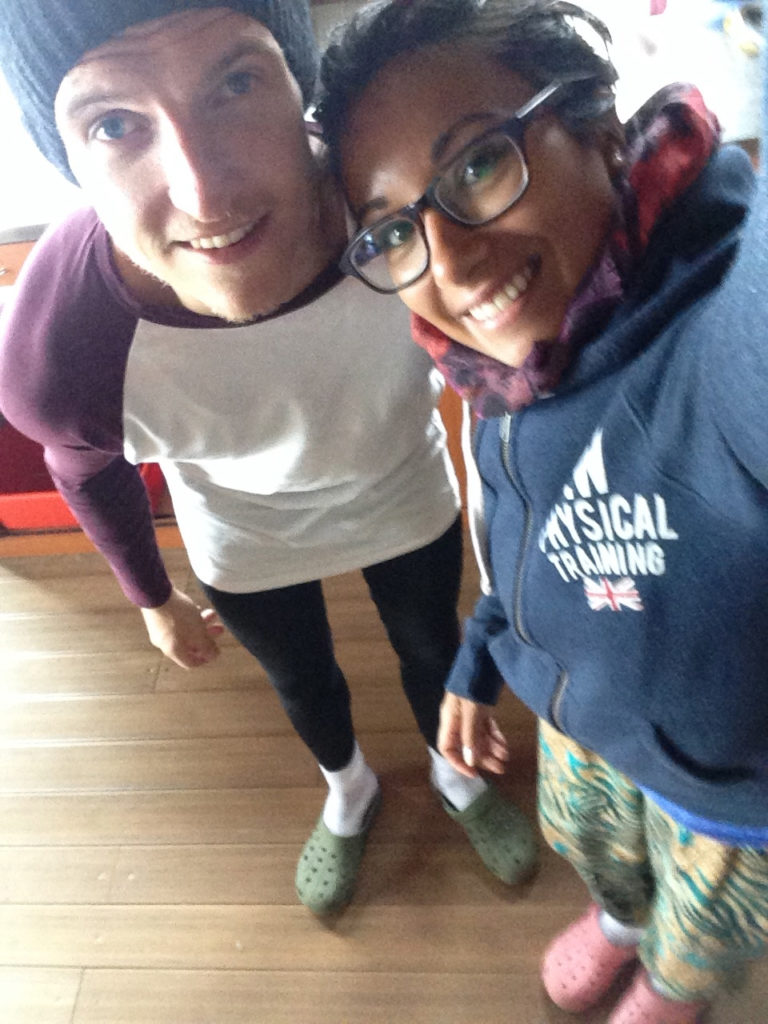 After a huge buffet dinner, we settled down with a cup of hot cocoa and watched the sun fall into the ocean of clouds from 3400m. As nighttime fell, we were more than ready to hit the hay in preparation for our 2am start on day 2 of our Mount Kinabalu trek. 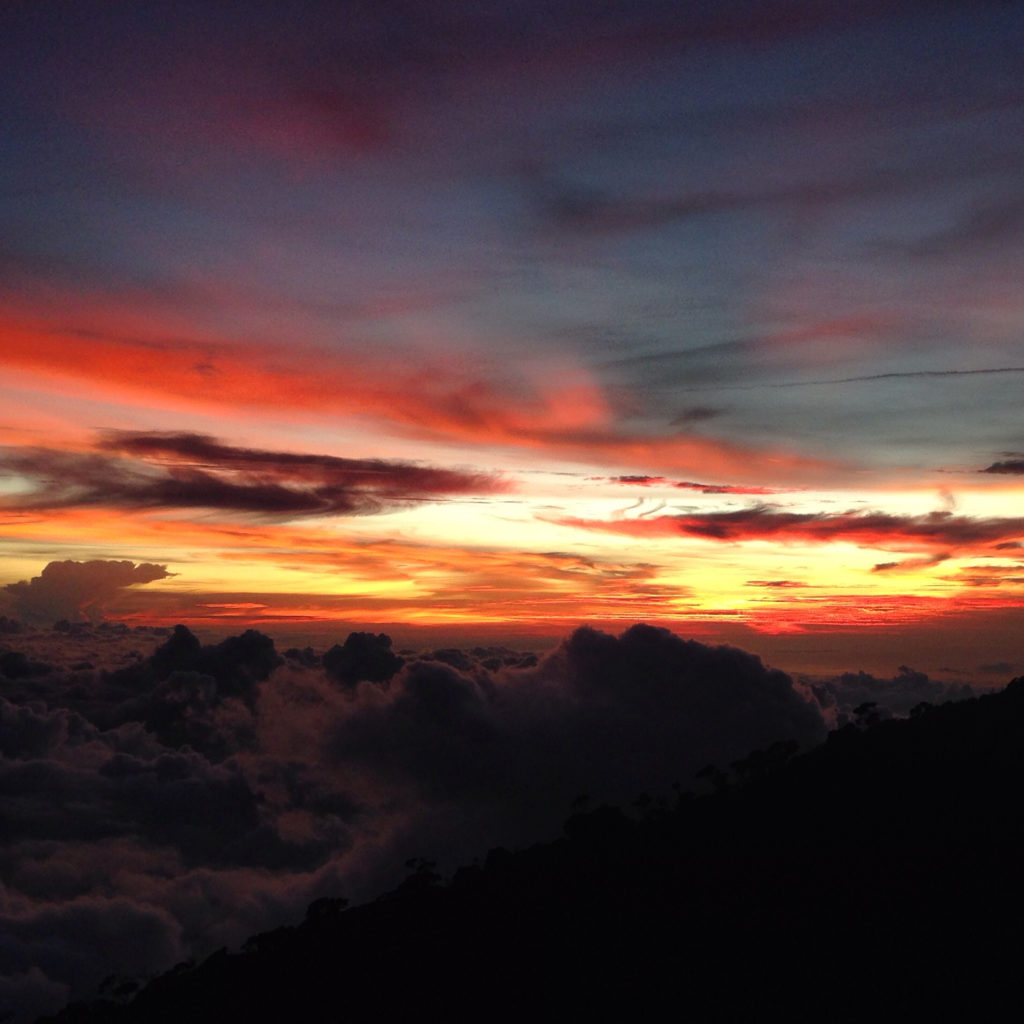 By 2.30am we were already ascending back up the mountain with the aim of catching daybreak at the summit. Our steps were becoming increasingly heavier and our breaths gradually shorter, and the lack of oxygen slowly began to take its toll and claimed us for a few more rest stops than expected. We clambered up the cliff face on all fours, with nothing but our head torches, the glare of the full moon and lightning storms to light our path. 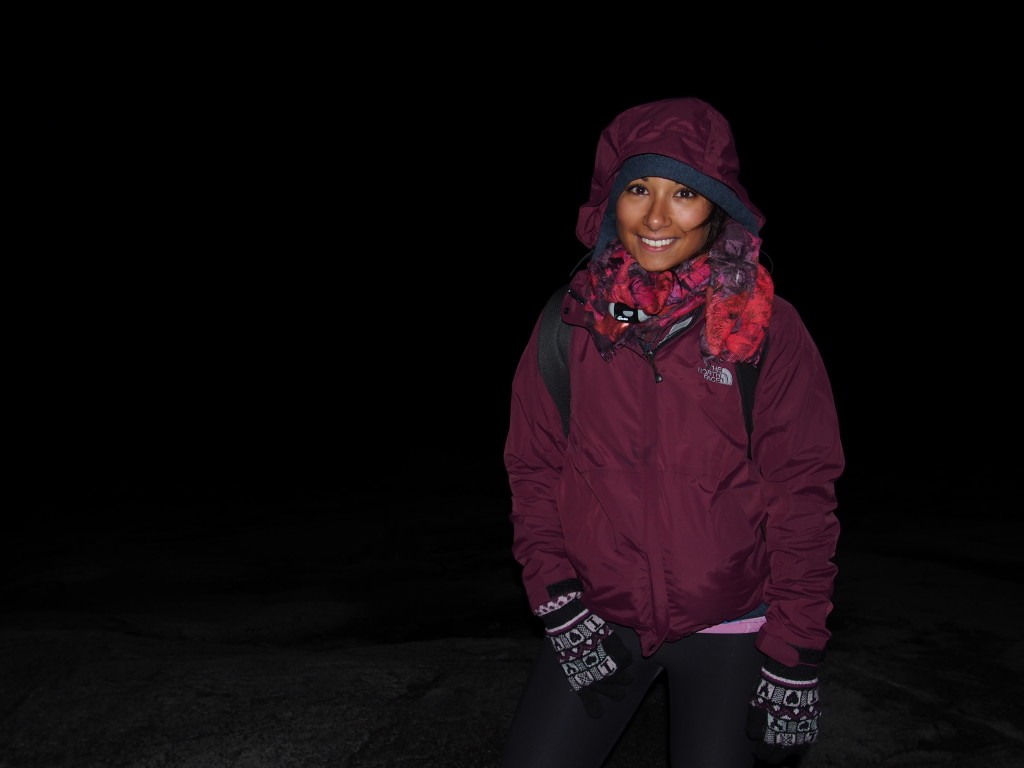 As we ascended higher, the mountain face got steeper and we were soon hanging on to the cliff face, using the jagged rock edges to hoist us up to the top. After 2 hours of climbing an almost vertical rock face, we were the first of all climbers to reach the summit. The air was still and we sat in silence appreciating what we had just conquered. We felt well and truly on top of the world. 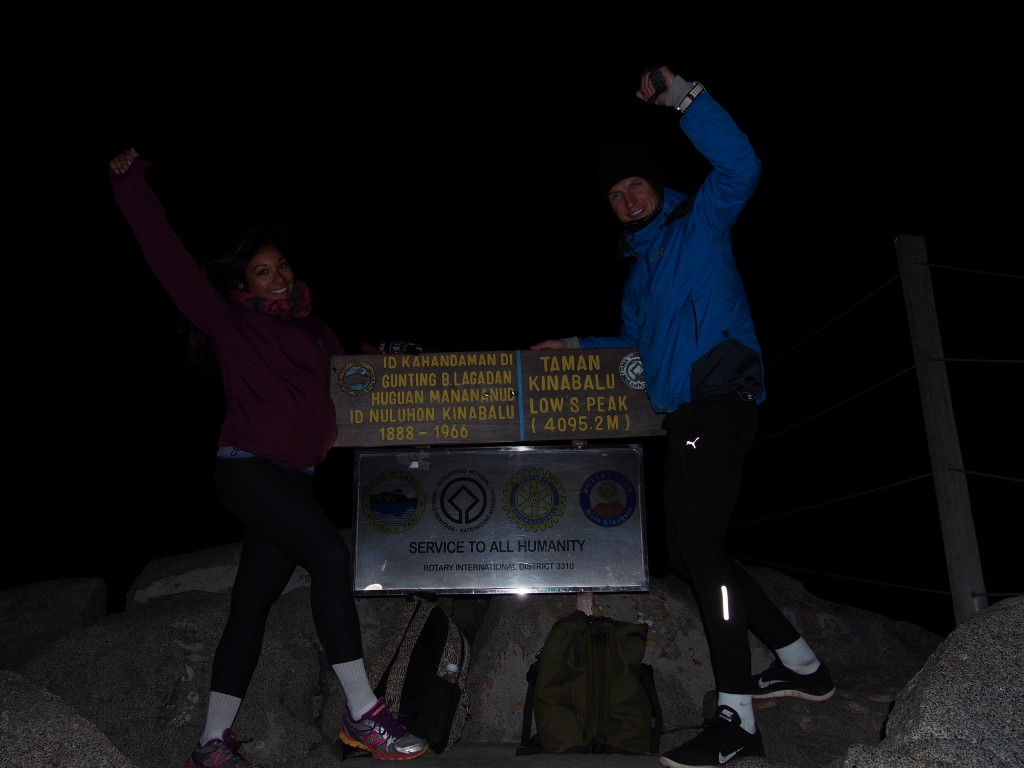 We sat in utter darkness for 30 minutes, huddling together in the freezing cold. The vibrant moon gradually disappeared as the skyline illumed a rose hue and a midnight blue. 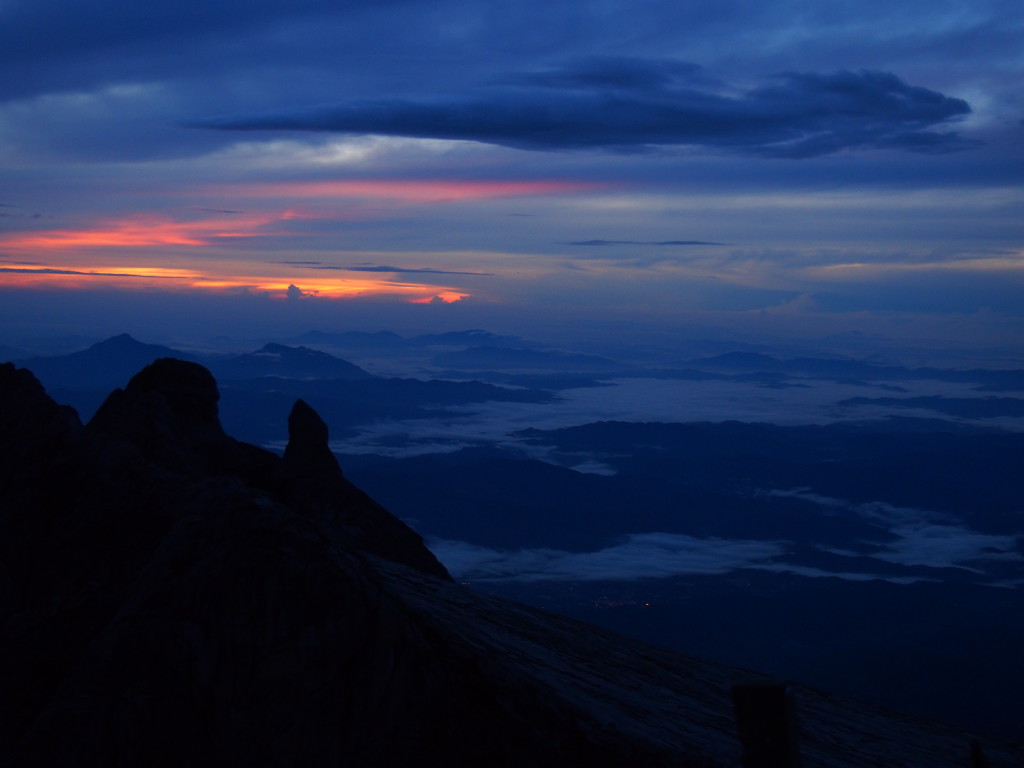 The ocean of clouds and mountain landscape soon awakened, and as 6am approached we were more than ready to escape the bitterness of the mountain chill and get moving. We didn’t quite realise the extremity of our climb until the darkness subsided and we descended back down. The gradient was steep, the rocks were slippery and exhaustion began kicking in. 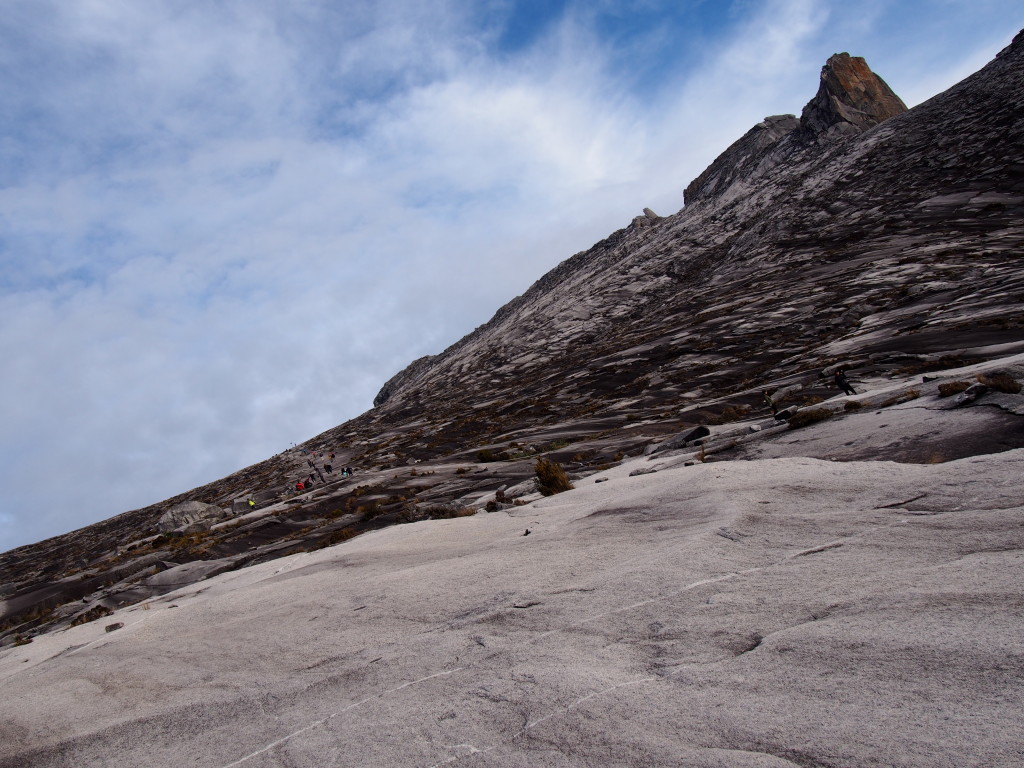 We clambered back down the rocks and made out way down to the starting point for the Low’s Peak Circuit, the highest Via Ferrata in the world. Via Ferrata is Italian for ‘Iron cables’, and involves climbing across rock faces using iron cables, metal rungs, ladders and steps hanging from dramatic positions and heights. 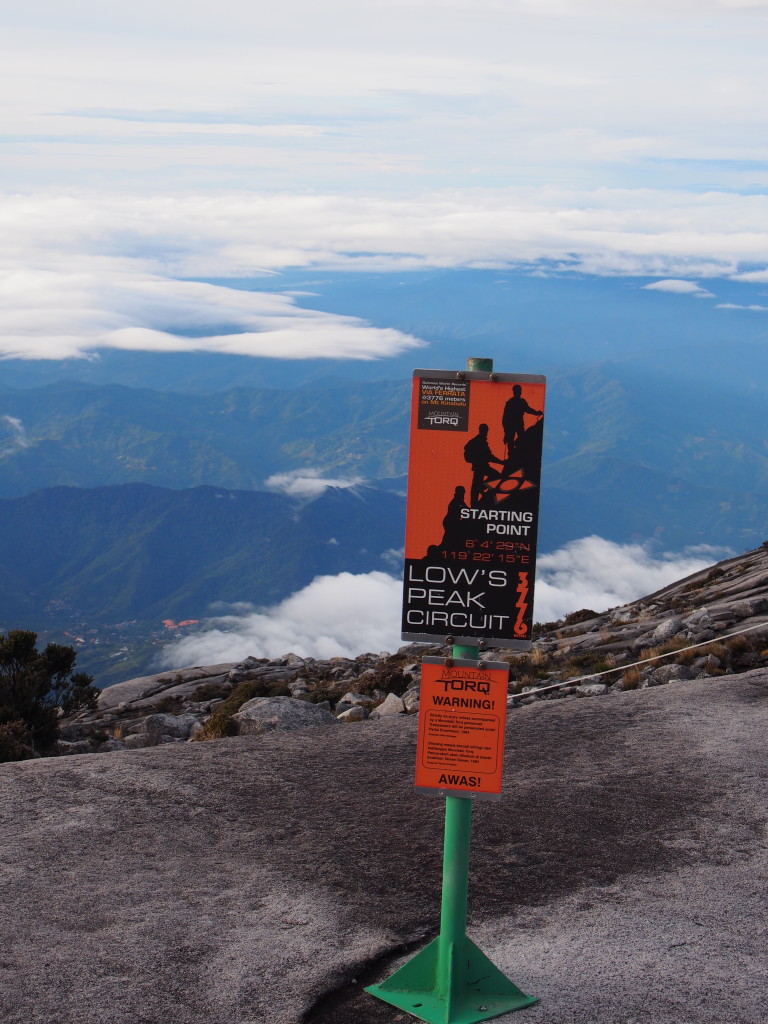 We prepared our harnesses, fitted our safety hats and began our descent down the side of the mountain. First off, we had to descend vertically down a sheer cliff face. I peered over the edge and my stomach pretty much fell off the edge thinking about the 600m-drop down below. 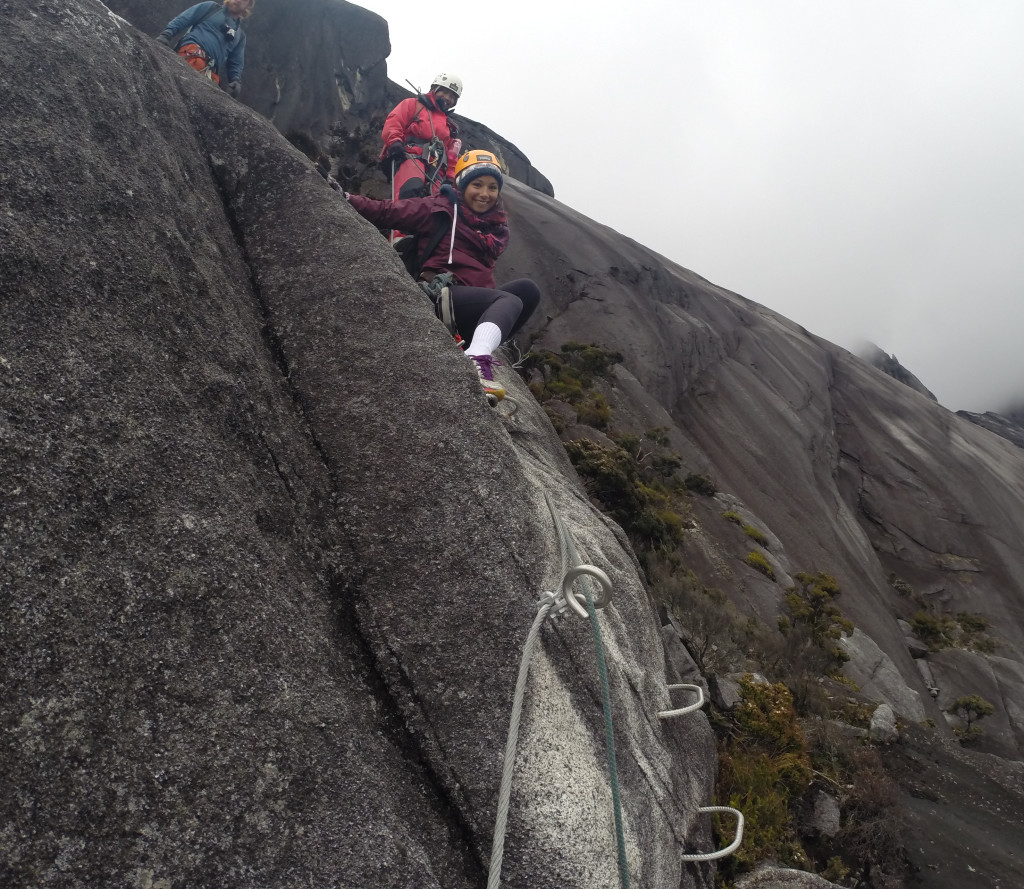 I was absolutely petrified. The descent involved climbing backwards down iron steps, shuffling across the cliff face and stretching down to reach the small steep caps that were embedded in the mountain, all whilst balancing and trying not to fall. 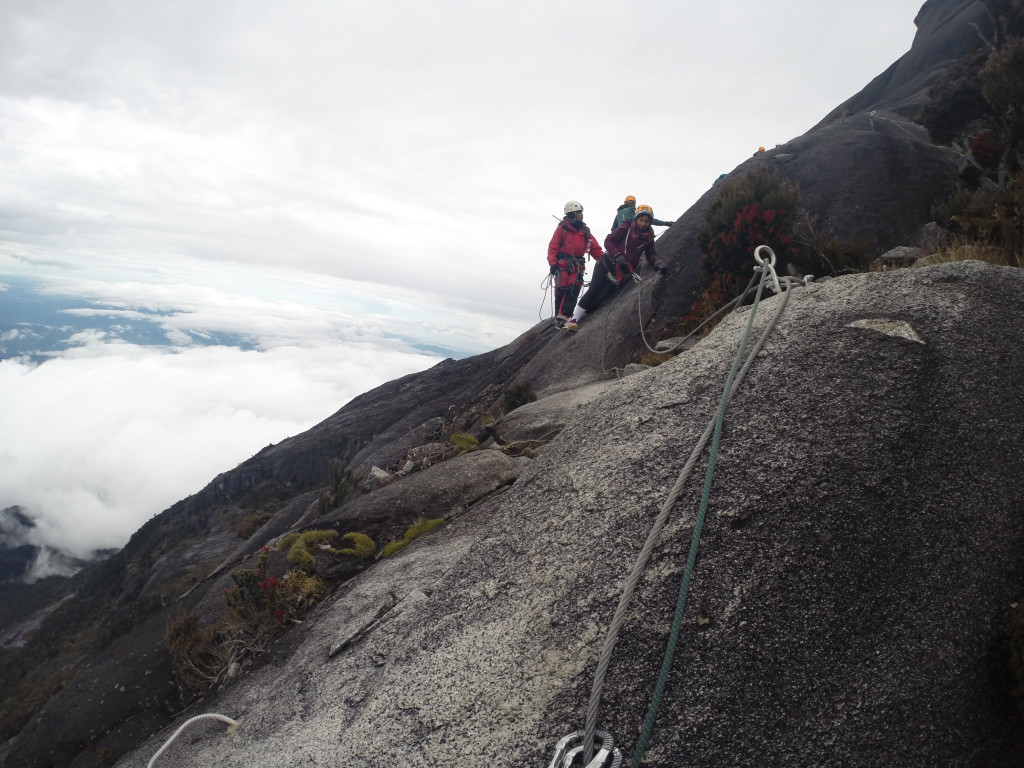 We continued down the Via Ferrata for around 3 hours, crossing steel tightropes and one of the world’s highest suspension bridges. The wind picked up and rain began to fall, and after a couple of hours of constantly holding my body weight, I was utterly shattered. 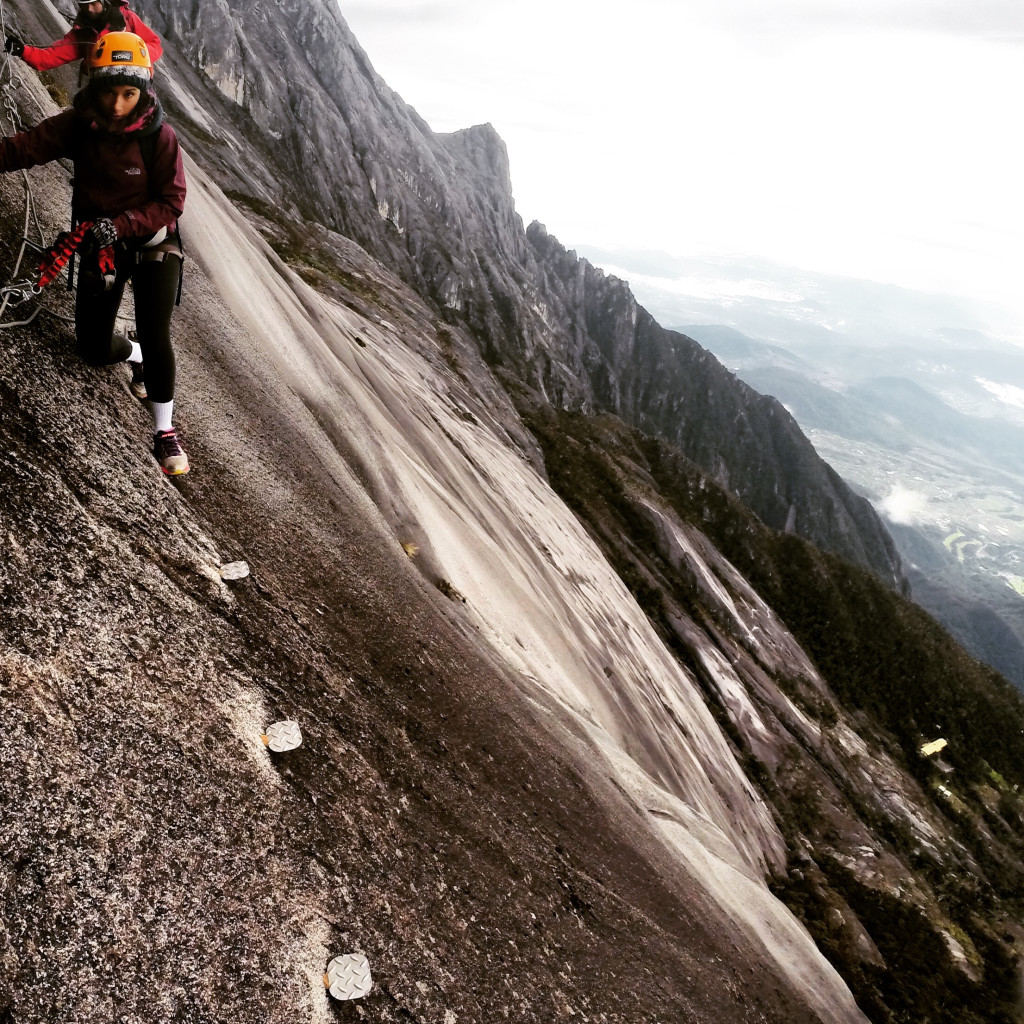 The views, however, were incredible – a pure landscape of mountains and clouds that stretched as far as the eye could see. It was truly exhilarating but absolutely petrifying. For a few brief moment I seriously questioned by ability to make it; as strong as I am, I was completely overcome with nerves and my instincts and emotions took over. While it was a test of physical strength, mentally it was a much bigger challenge. 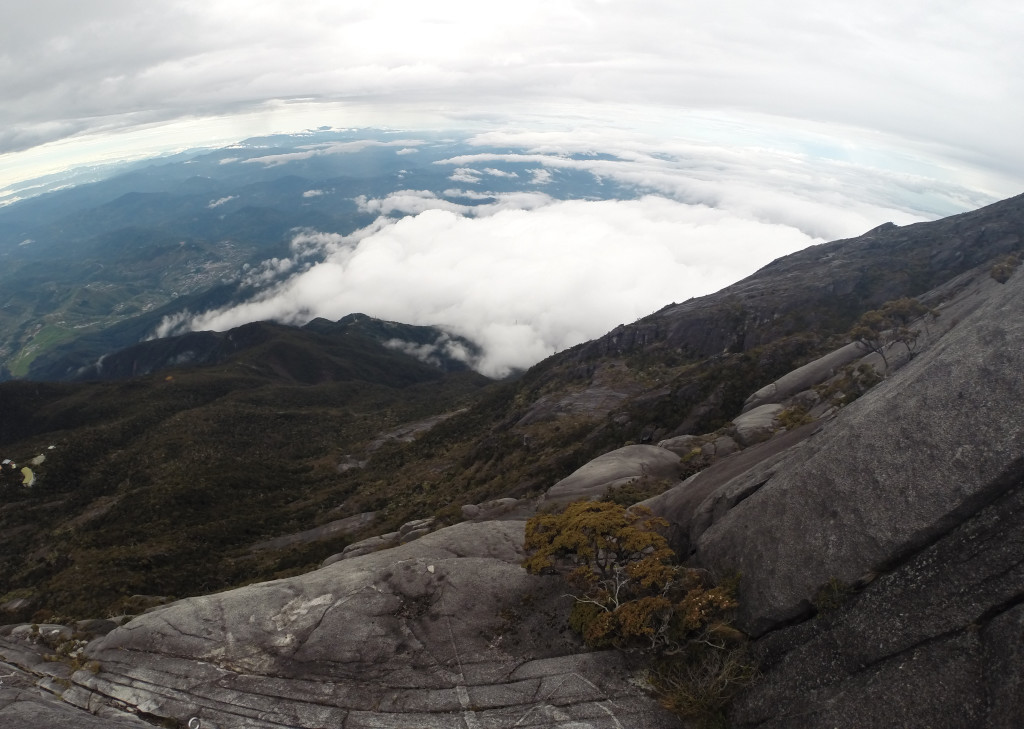 We made it down to the resthouse at 3400m for a spot of breakfast, and continued our 3 hour climb back down to base camp. The descent was arduous; our ankles were tired, our kneecaps were worn and our morale was low. By this point, we had been physically active for around 12 hours already, so you can imagine it wasn’t an easy ride.

We finally made it back down to the headquarters to be greeted by this sign. Matt and I smiled each other, elated that we had finally finished and so proud that we’d made it together. 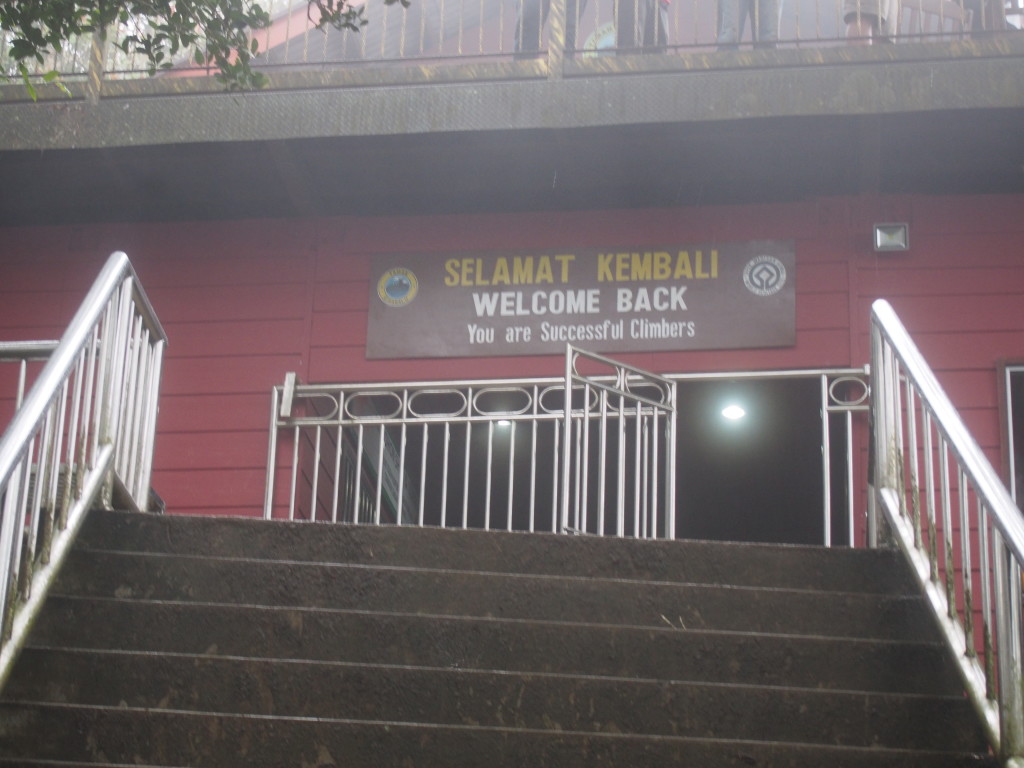 All in all, climbing Mount Kinabalu is an experience I will never forget. It was hard work, both mentally and physically, and it seriously tested our fitness levels and sheer motivation to power through any pain and make it to the top, but it was well worth it!